I've enjoyed keeping this blog so much.

People have written me from all over the world - both in comments on the blog itself and in email behind the scenes.

This blog has had 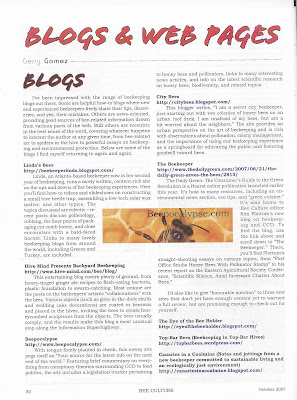 The most popular places people go to on this blog (besides the first page) are:

Perhaps the biggest compliment on the blog came from Bee Culture magazine in October 2007 when my blog was featured first in an article on Blogs and Web Pages. I was completely surprised and found out about it through a post someone put on Beemaster! I scanned the page so that you can see it if you don't subscribe to the magazine.

As a beginning beekeeper, it is my pleasure to share my trials and tribulations, catastrophes and triumphs with all of you.

See you next year!

Good news! The Bees in Both hives are alive and flying 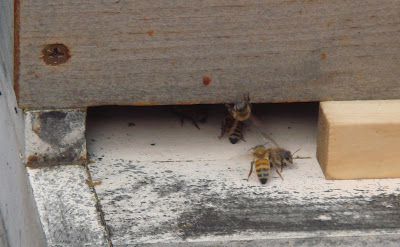 When the temperature hit 50 degrees (F) this morning, the bees started flying out of both hives. We are supposed to have a high in the 60s today so they should have some time to do cleansing flights and carry out the dead.

I even noticed a bee bringing in pollen. The only thing blooming around my house is a Camellia 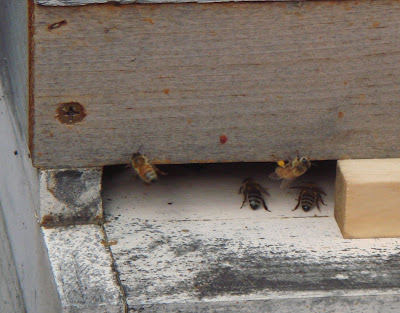 Sasanqua. The Sasanqua blooms in early winter and the one in my yard is blooming a lot right now. I guess that's where she got it - the pollen looks like what I see in the plant.

The first two pictures are from Bermuda. The second two are from Mellona. In the first Mellona picture, one bee is trying to convince another bee that she is dying and should be carried away.

There is less activity at Mellona, but it has always been a smaller and more tranquil hive than Bermuda.

Well, at least for the moment, I am relieved that all seems well in my bees' world. 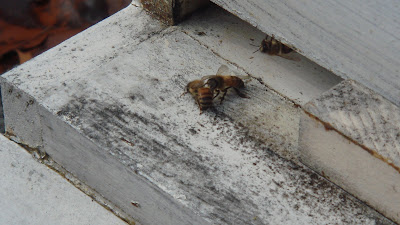 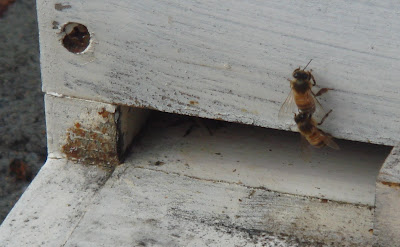 There's not much news on the beefront. My bees are clustered, it's cold in Atlanta, the hives are heavy and there's nothing new to report.

Everyone that I have given lip balm to is ecstatic about it - which makes my day.

So I decided I should post about the short course that is being offered by the Metro Atlanta Beekeepers Association. If any of you are close to the Atlanta area, the course is a great one. After I took the course I bought bees, joined the club and started my blog.

Here's the link to the short course.

You'll notice if you click on the agenda that I am one of the presenters - that doesn't mean I'm an expert - in fact I'm doing a little presentation with some other beginning beekeepers to help me on the trials and tribulations (and hilarity) of the process of beginning beekeeping.

If you sign up, please tell them that you heard about it from me!!
Email ThisBlogThis!Share to TwitterShare to FacebookShare to Pinterest
at 2:21 PM 2 comments:
Labels: Short Course

The Metro Atlanta Beekeepers Association Holiday party was held at the Atlanta Botanical Garden (where we have our monthly meetings) on December 12. Below is a slideshow of snapshots from the event. A great time was had by all!

I made my first attempt at making lip balm today and it turned out OK - not great, but I learned a lot. Here's what I did:

1. I bought Coconut oil (organic and virgin) from the Internet
2. I bought 100 containers from the Internet and some from the Container store
3. I bought 1" circular mirrors from EBay
4. I followed the recipe in Kim Flottum's book: The Backyard Beekeeper.
5. I weighed and melted the wax
6. I put the glass jar of coconut oil into a boiling water bath to melt it
7. When both were melted and both were 150 degrees F, I stirred them together.

Filling the containers wasn't easy - somewhat messy, but I succeeded in filling 90 small containers and five larger ones. As they cooled I realized that in about 20 of them, the honey/vanilla mixture was on the bottom of the lip balm and that those would not be usable because there was liquid below the balm mixture.

I don't know if I can wash and re-use these containers - I hope so - it's a lot of effort if I have to throw out 20 of them.

My camera lens had a smudge on it, but I made a slide show anyway to show you the pictures:

Checking on the Bees 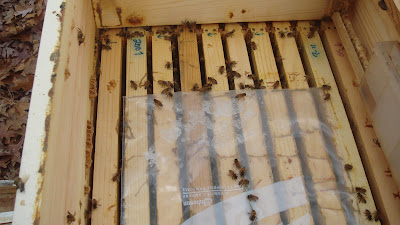 I had two jars of heavy sugar syrup ready and decided to put them on the hives today.

If you don't believe in global warming, you should come to Atlanta. It hasn't been significantly cold yet although we did have a couple of below-freezing nights. Today it is 78 degress - horrors - and it's supposedly winter. I've lived here since 1979 and each winter seems significantly warmer.

The temperature roller coaster is confusing to the bees who are flying today, as one might expect.

I opened Mellona (first picture) to find the feeding bag I had left earlier was completely empty, so I replaced it with a feeding jar with holes punched in the top. I didn't make up feeding bags this time, although Jennifer Berry swears by them, because the last time I put a feeding baggie in the hive when I came back it had 15 dead bees inside it. 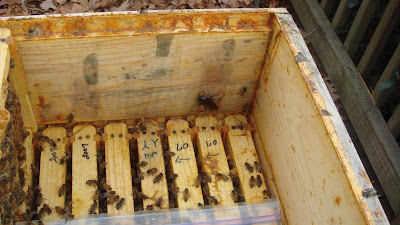 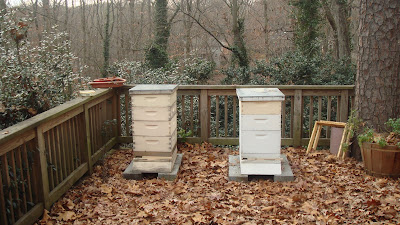 Bermuda I was surprised to find a huge palmetto cockroach in residence - see him at the upper right corner? The bees were ignoring both me and the roach. I brushed a few bees aside and gave them a jar for feeding as well. It was too tall for the empty super that is on the hive so I found another empty super and added it to Bermuda to accommodate the feeder jar.

While I was fooling with the bees, I added water to their water source. With the terrible drought we are enduring (did someone say global warming?) this may be their only source of water. I don't even know if bees take in water during the winter, but I don't want to neglect them in any way this year - I can't stand to think of my bees who died last winter from beekeeper neglect. 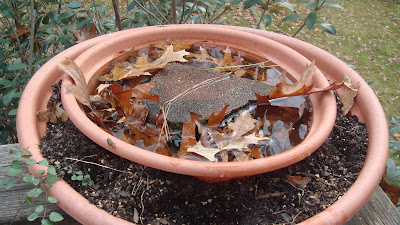