I don't know where the fall went.  It's November and I have no idea what happened to autumn.  Today I'm in Rabun County.  I've missed being up here and have entirely missed the fall leaves.  I haven't done a good job of checking on the bees up here, so I wanted both to check on the bees and turn on the heat at my house so that the pipes won't freeze as the winter arrives.

I arrived at the School House Garden and was shocked with what I found.  As you remember, one of the hives had died.  I left one box on the cinder blocks - a slatted rack, a screened bottom board, one hive box, an inner cover and a telescoping cover.  My hope was that in the spring a hive might move in as a swarm. 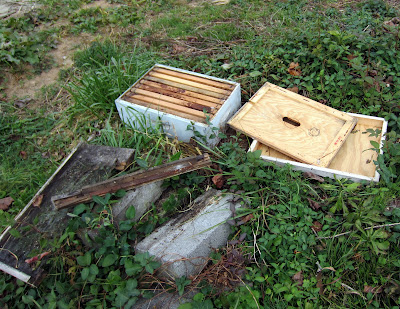 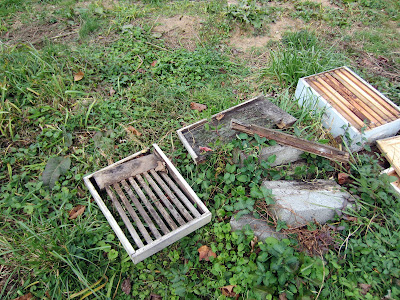 I don't  know how to think of this - the cover on the hive box could not have been off for long because the wood is not discolored and I haven't been here in two months.  The slatted rack and screened bottom board are discolored and wrecked.  I don't know if an animal did this or since the weeds had been cut back, if a tractor ran over the whole thing.

At the remaining live hive, I saw an occasional bee enter.  The bees all entered on the same side of the entry, but there were very few of them. 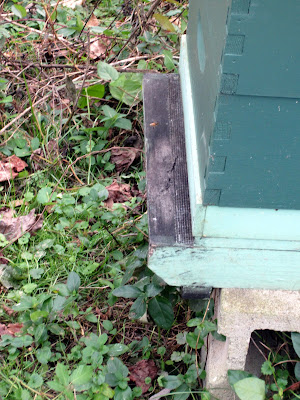 I had brought an empty 10 frame box to act as a surround for a rapid feeder.  So I set up the rapid feeder over the inner cover and filled it with honey.  It was 62 degrees.  Generally when a hive is in need of stores, when you put on the feeder, at least one or two bees immediately show up in the tube to sample the new honey. 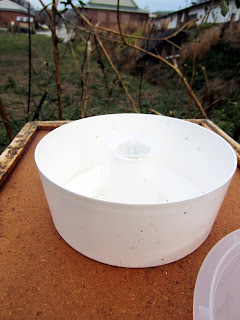 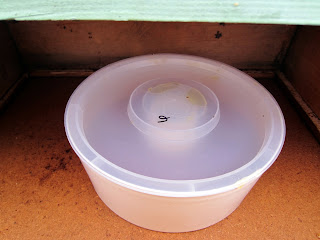 Not a bee appeared.

I lifted the hive from the bottom hand hold.  It seemed relatively heavy as if they had put on a good amount of stores.

I get really cautious when I've lost a hive, so I didn't go into the box and just left to go to WalMart.  While I perused the aisles at WalMart, I kept thinking about the bees.  Were those hive bees or were they marauding bees from the nearby hive in the wall of the old school building?  Should I have left all of that good honey on a deadout when there are hives that could use it in Atlanta?

Needless to say, after I checked out of WalMart, I drove back over to the community garden and opened up the hive box.

The top box held honey but no bees.  But on the second and bottom box there were bees covering four frames in each box (8 frames of bees in all).  I knew they had clustered there the night before when the temperatures were in the 30s, and I felt relieved to see them. 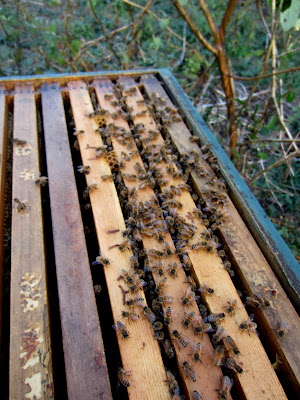 Still cautious, I didn't check any further to see if there were a queen, but instead closed up the hive with a sigh of relief.  I'll check them again in a few weeks.

I rode home wearing my sunglasses this morning because as probably all of you know, during the fall, leaves look more colorful through sunglasses than they actually are so I could have the illusion that I didn't miss the fall leaves in North Georgia!