When I give talks about bees, I always begin by saying that if you ask ten beekeepers a question, you'll get at least twelve answers. Beekeeping is as much an art as it is a science, and so there are many ways to keep them.

I was asked to become the beekeeper at SPARK Elementary school - the school where my oldest grandkids have been students. So absolutely I wanted to do it. They have had bees for about three years at SPARK - and the beekeeper was an interested volunteer - not a parent or a grandparent. He just wanted to do it. But he was leaving for Army training and needed to give up his bees there.

I knew there would be differences in how we kept bees, and I agreed to meet him and the PTA president at the school in late May to get introduced to the bees there. He had two hives and a homemade observation hive. The school hives are on the rooftop of the building. It's extremely hot up there - in the 90s at least every summer day. And the sun beats down onto the hives.

Here's how they looked: 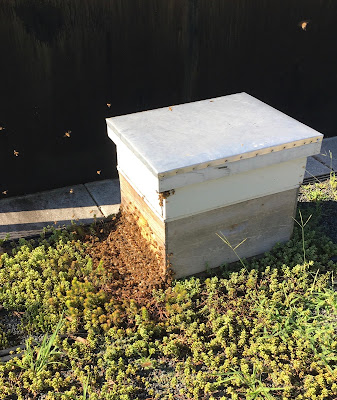 Hive #2:
Note: this is from my second trip - on my first trip the hive had four boxes on it. It also had four foot tall weeds directly in front of it and a mountainous fire ant hive diagonally in front of it. The PTA worked hard between my visits to take care of the weeds and fire ants. 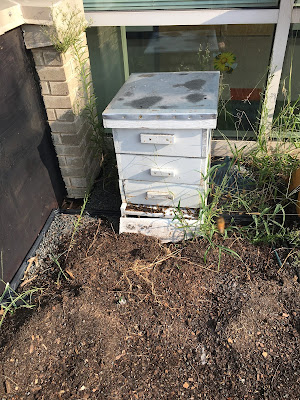 Hive #3:
This is a homemade "observation hive." In reality, this is a nuc hive with two deep boxes. On each side of the nuc is glass and there is no cover for the hive. 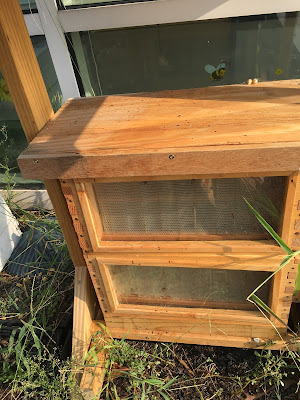 I keep my bees up off of the ground on cinder blocks, so I didn't say anything critical to him, but I knew that if I were going to be in charge of the hives, one of the first things I would do is raise the hives. They also are on solid bottom boards.

So I went back on my own and really looked at everything. If you go back and look at Hive #1, I'd be interested in what you observe. SPOILER ALERT: I'm going to put some space in here so as not to reveal anything until you scroll back up to see what you see.

There are three things of note in Hive #1:
1. The bees are obviously in need of ventilation because they are spilled out in a dinner plate sized circle which would have been a beard if they were not on the ground.
2. The top box is coming apart, so the bees are guarding the large opening just under the top cover.
3. The top box has NO handles or cut-ins or grips of any kind to lift it.
HORRORS!
Note also that I use only 8 frame mediums and these hives are in 10 frame deeps and shallows.

So I went alone on my second trip and realized all of the above. I couldn't get the top box which was full of honey off of the hive. All I was able to do on the second trip was to put beer caps under the top cover to give the hive a little ventilation. I also took a completely empty top box off of Hive #2 and put it on Hive #1 to give them some more circulation.

I also noticed that probably in response to my gasping comment about the observation hive: "They don't have any cover?" that the former beekeeper had draped a beach towel over the hive. 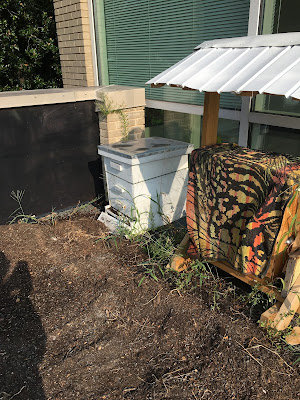 So on visit three I took Jeff, my son-in-law and strong beekeeper, the MABA hive lifter, a screened bottom board, a slatted rack, and a ten frame medium (the only one I own) which, of course, does have hand grips.

This is how the bees looked when we arrived. You can see the extra box I added and can see that it really helped with ventilation since now, although there is still a beard, the bees are not spilled all over the ground. You can see the handle-less box is splitting at each corner. 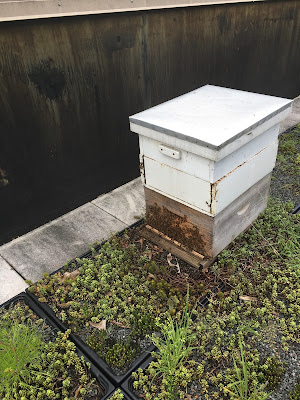 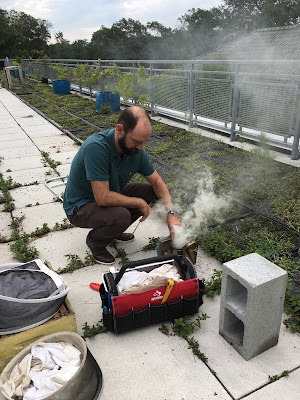 Jeff lit the smoker. You can see the extensive rooftop garden behind him.


We took the empty box off of the top and covered the exposed second box with a hive drape. We set up the metal hive lifter (on ground surrounding the hive) and moved the hive to one side. You can see the empty dirt where the hive was sitting. 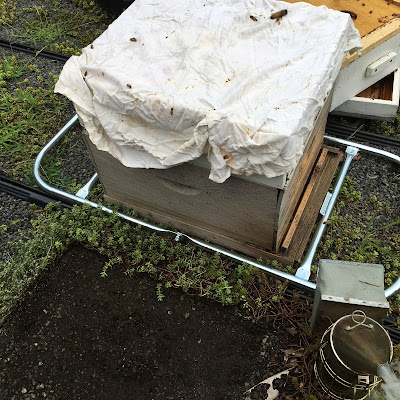 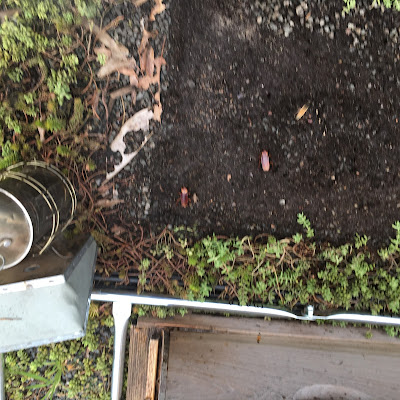 Roaches were enjoying life under the hive. 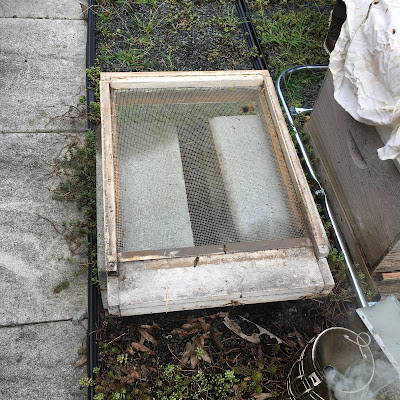 We returned the old hive to its elevated position. Now to deal with the falling apart hive box. 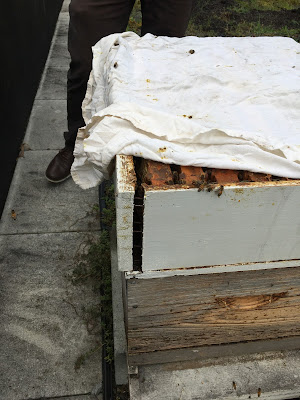 We removed the hive frames one at a time to the yellow box I had brought. They were all filled with honey - which is great for the bees. And the box was equipped with spacers which spaced the frames so we didn't have to pry up propolis. I've never worked with a box with these spacers and it was a pleasure. I wanted to find a photo of one to show you, but the commercial companies don't appear to carry them any more. You can see the spacer (I thought it was called a rabbet) on the end of the hive box in the photo below if you click on it to enlarge it.

Actually I finally found these on Pigeon Mountain Trading Company. They are frame spacers and turn a 10 frame hive into a 9 frame one by spacing out the frames, allowing the bees to make thicker combs. 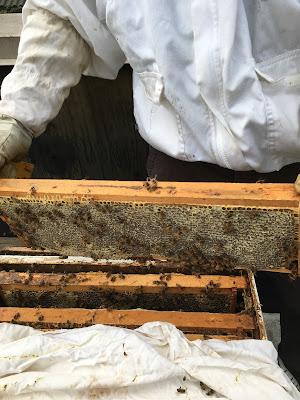 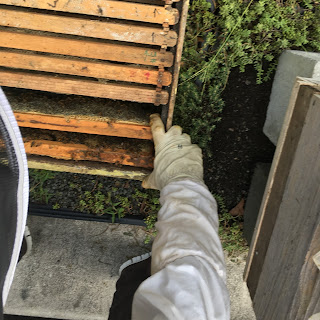 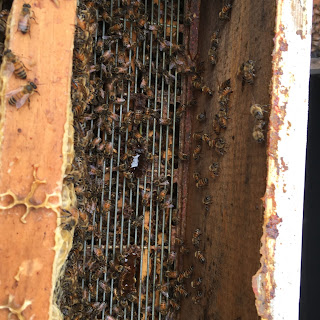 The former beekeeper had queen excluders on both of the full-sized hives and since the bees are used to that, I left them for now. Next year, I may remove them. 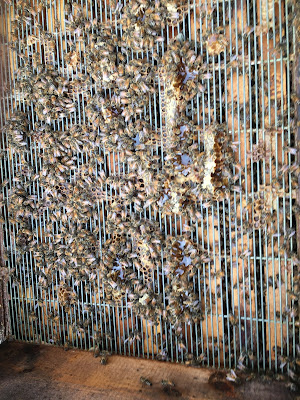 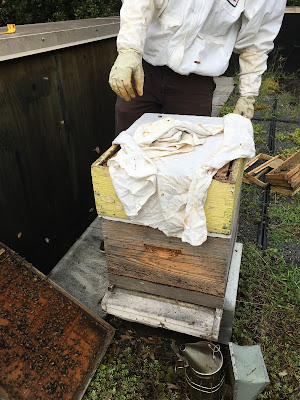 Then we put the yellow 10 frame box on top of the hive and returned the empty third box to the hive.

We walked away from the hive and suddenly I realized that the leaning board was the former bottom board. The bees were not moving into the hive - what if the queen were there? I didn't photograph, but did lean the bottom board against the hive so the nurse bees could walk in, but not before checking well to assure myself that the queen was not outside.

The next day I returned to remove the rotten bottom board and falling apart top box and the bees looked as happy as bees can look. 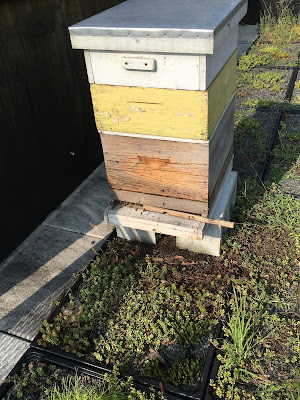 We'll return next week to put Hive #2 on cinder blocks with a screened bottom board and a slatted rack (if I have 10 frame stuff in my basement). And I'll put an oil cloth cover over the observation hive. There are bees in that hive but none on the outside frames which are totally exposed to light every single day.