On May 2, 2018, I got a swarm call to go to the Inman Rail Yard off of Marietta Street in Atlanta. I had no idea Atlanta had such a large train yard. Atlanta did start as Terminus, rather than Atlanta because of the many rail lines coming into the city. The rail yard is HUGE, covering many acres of land - I believe they said thirty acres.

The men at the rail yard were quite concerned and wanted to save this swarm of bees, so I gathered my swarm kit and drove very carefully into the rail yard. To get to the swarm, I had to cross track after track, each labeled with a large sign that said: DANGER, TRAIN DOES NOT STOP.

As I waited to enter the monitored area, I watched the huge cargo trains go by my car: 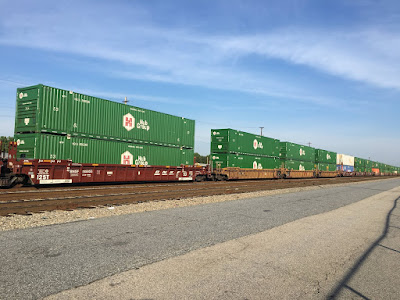 Here's the fierce swarm I was summoned to rescue: 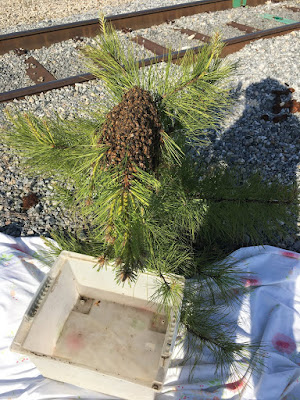 I shook this simple swarm into my box on the white sheet, covered it with a ventilated hive top, and waited a while to allow all the bees to join their sisters and the queen. 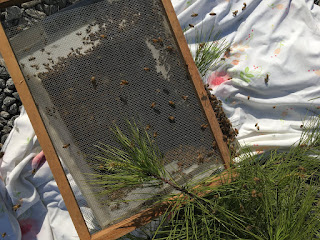 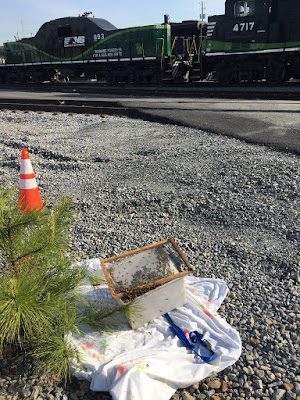 And to give you perspective on this Charlie Brown Christmas tree, here's how the tree looked post-swarm removal: 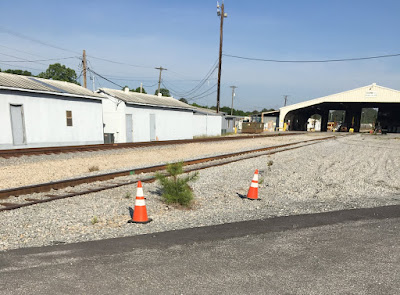 I imagine this swarm is from a feral hive because there are no obvious places for a backyard beekeeper to be within the thirty acres so I had high hopes of their survival. But I captured them on May 2 and in Atlanta, the nectar flow is almost over at that point. In Atlanta, a swarm in May is not worth a load of hay!

I installed them in a hive at the community garden in my neighborhood. Because they were installed at the end of the nectar flow, they didn't have enough time to build up their hive and gather nectar for the cold months. Going into winter, they felt very light to me so I gave them two feedings of bee tea in a rapid feeder. 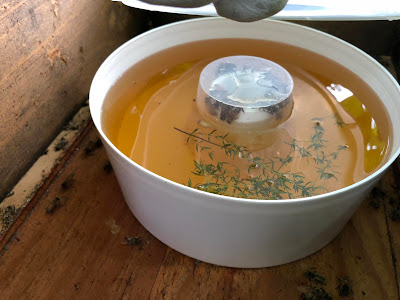 We've had a string of very cold days and now we are experiencing several February days that are like summer. Today the high is predicted to be 78.

I walked up to the garden yesterday to see if the bees are flying and indeed, the spunky little Charlie Brown swarm is flying and they have survived the cold.

When I opened the hive, I found the bees exploring the feeder in hopes that it would be tea time. So today I am going to pour just one quart of feed into the feeder to top off their stores, as it were. I don't want to feed them heavily because then the bees think there's a nectar flow on and start building up brood before there really is anything for them to forage.

Email ThisBlogThis!Share to TwitterShare to FacebookShare to Pinterest
at 10:47 AM 2 comments: