Email ThisBlogThis!Share to TwitterShare to FacebookShare to Pinterest
at 7:20 PM No comments:

Most mornings my oldest daughter calls me as she walks her dog. We always have fun catching up with each other. I imagine she's really calling to see if her OLD mother is still alive and breathing, but I love our time together as we each get ready for the day.

I am usually in the middle of the NYT Spelling Bee when she calls so I get out of bed, get dressed, and multitask while we talk, using my EarPods so I can be hands free. Today was different. The housekeepers were arriving at around 8:30 and I wasn't quite ready for them so I was up and organizing my kitchen to be able to get out of their way.

Yesterday I harvested honey from my top bar hive. My kitchen still had the large honey pot and other leftovers from the day's adventure.

I've not harvested from the top bar with bees in it. Once my top bar died and I harvested the honey still in the hive, but yesterday the hive was full of active bees. It's a great hive that I got as a swarm in early May so I only planned to harvest one or two bars just to taste their honey. We are in the middle of the dearth so I expected angry bees. Instead they were calm and I got away without a sting.

I recorded the inspection so I didn't take still photos but here are a few from the harvest: 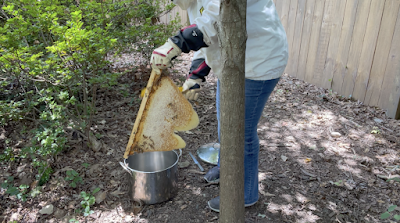 Brushing off the bees. 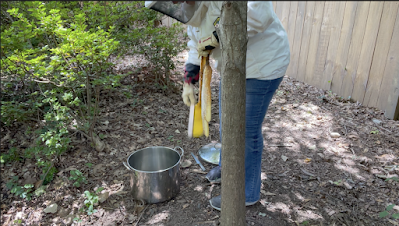 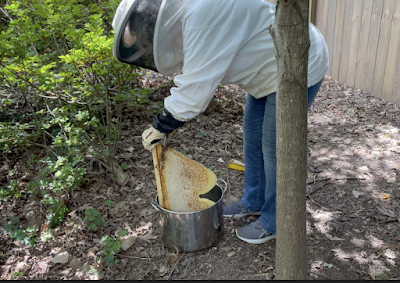 Cutting off the wax from the top bar. 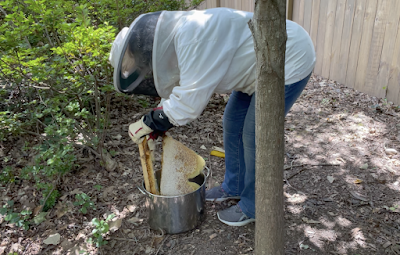 I literally put the top on my stew pot, brought it home, and that's what was sitting in my kitchen as the housekeepers arrived while Sarah and I were on the phone. 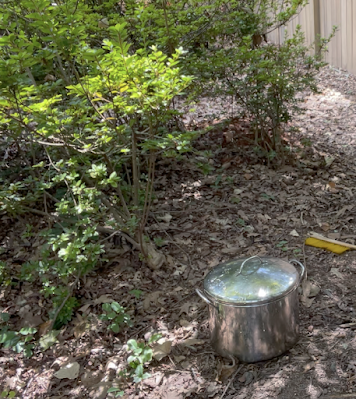 It only made sense to quickly crush the honey and put it into the filter bucket so that's what I did while Sarah and I talked.
I'm leaning over the pot, crushing the honey, when my left EarPod fell out of my ear into the crushed wax. 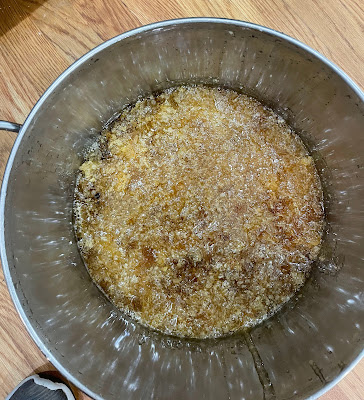 Horrors! I didn't take a photo because those things are expensive and I didn't have the option to wait and see whether it would sink or swim. I grabbed it off of the surface of the crushed honey.
Moment later, I said to Sarah, "This is delicious honey."
She said, "Mom, are you licking the EarPod???"
"No, my fingers," I replied.
I grabbed a paper towel and tried to wipe all of the honey off of the EarPod. I put it back into my ear to dead silence. Sarah reassured me that it probably just needed a break. I took the EarPods, wiping the honey-ed one one more time, and put them into their charging case.
The end of the story is that the honey is absolutely delicious and the EarPod recovered from its honey shock and is just fine, working as if it hadn't had the luxury of almost drowning in honey.
Email ThisBlogThis!Share to TwitterShare to FacebookShare to Pinterest
at 11:18 AM No comments:

Harvesting Honey in the Dearth

Since I moved last June, I didn't harvest last year. I was in the process of moving my hives. And this year, I had only one hive out of two from the year before that was still standing when it was time to harvest honey - that was the hive that is at my daughter's house. Generally I try to harvest at the end of May, early June, instead of now in July, when the bees are in the throes of the dearth and really unhappy.

This year I was sitting at a red light and a woman crossed two lanes of traffic turning left into my lane, didn't see that the red light had caused the traffic to stop and slammed into my driver's side door (ARGHH). So given what the pandemic has done to supplies, the accident happened in April; I couldn't even get an estimate until May; the repair couldn't begin until mid June and my car was in the shop until this week. I didn't want to put honey in the trunk of a rental car so I delayed harvest until this week.

Needless to say, the bees were not happy. This was a hive we moved from Sarah's backyard to the front when she had a tree next to it cut down. I haven't opened them since the move on May 16.

First I observed the hive for a long time from the front of the hive. The bees were very busy and active, coming and going in and out of the hive, quickly but peacefully. There was nothing unusual in their pace or the way it looked on the entry. A lot of bees flew in with honey on their back legs - about every fifth bee. The bees weren't carrying out dead bees or dead larvae.

From observation of the front of the hive, I decided we did not have to do an inspection. The hive had a bottom box full of brood and the box above it has always been a little brood on the left side and then all honey. But it's the dearth and not a time to go deep into a hive because the bees tend to be "hangry."

AND because it's the dearth, I put on a zip-on veil and jacket. I meant to put on gloves but forgot and when I opened the hive, I was immediately stung on my hands. The message was quite clear so I put on my gloves! On the top of the hive were about five cockroaches - not unusual in the height of summer in Atlanta. They are kept on the top by the bees and just remain their optimistic that they will get fed, I suppose, but to no avail. Roaches, earwigs, black widow spiders are all often on top of the hive and are no threat to the bees. There were also LOTS of bees.

The top box (#4) was completely empty with every other frame drawn or partially drawn. None of the comb was being used so I removed that box. The third box had honey in about three of the frames and none of them were full. I decided to take those three frames.

Typically in a honey harvest, you don't use the smoker because you don't want smoke to infuse your honey. But these bees were in such a bad mood that I decided that the smoker would be a definite feature of this inspection. With the help of my daughter, Sarah, I took the three frames - I actually had to take four because one of the frames was slightly cross-combed with a drawn but empty frame beside it. I took those two together in case breaking the cross comb might open honey cells. I had put this box on the hive right at the very end of the nectar flow and the bees had not been able to fill it.

I put the three/four frames into a plastic nuc box. Then I filled the spaces we left in the third box with the drawn frames from the top box. I left the top box off of the hive and took the nuc box home to harvest. I have no photos because I recorded the whole thing. I'll have it up on YouTube and add it to this post on July 27 when I am offering my bee club a virtual hive inspection.

Email ThisBlogThis!Share to TwitterShare to FacebookShare to Pinterest
at 1:44 PM No comments:

I am having such fun creating these bee-themed crosswords. By the end of the year, we'll have a collection of them, each on the bee theme for that month. Here's the one I did for July:
Email ThisBlogThis!Share to TwitterShare to FacebookShare to Pinterest
at 12:18 PM No comments: