Give a Bee Hive

If any of you are doing last minute charitable contributions as the clock approaches midnight and the end of 2012, a great thing to do is to contribute to the Heifer project.  Only $30 provides a hive of bees to someone in a country where they need help to make a living.

Their page is a little slow tonight as many US citizens try to do last minute donations, but it is well worth it and you will be adding to the honey bee population as well as increasing the number of beekeepers in the world.

If you didn't know this about Heifer, when they give an animal or in this instance, a beehive, then the recipient has the responsibility to pass their knowledge on to another person.  In other words,  a new beekeeper should, next year, split the hive they were given this year and give the split to another person as well as help the person get started as a beekeeper.

It's the old teach a man to fish approach rather than feed the man fish. 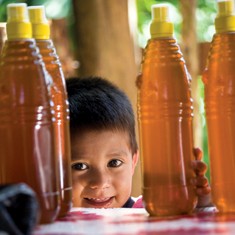 Email ThisBlogThis!Share to TwitterShare to FacebookShare to Pinterest
at 6:13 PM No comments:
Labels: heifer

Every year my collection of ornaments bee for the tree grows a little.  Here's what my tree looked like in the "bee" section this year: 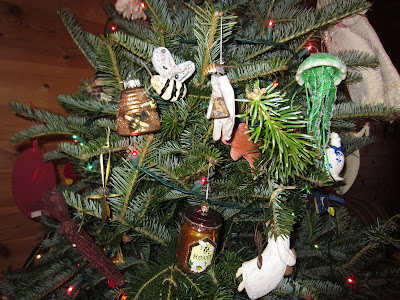 There's a bee from my daughter, Becky, a beekeeper's glove from my friend Nancy, a honey jar from my friend Mary, a lady beekeeper (her face is obscured but she has appeared in other holiday posts from previous years).

This year I was given two new ornaments bee.  My friend Gina gave me an adorable skep and my sister Beth gave me a metal bee: 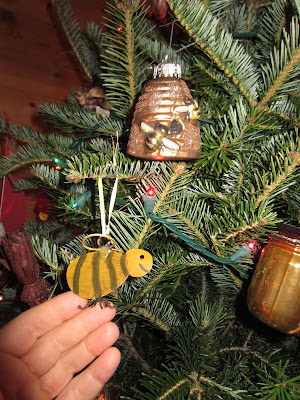 Sadly, the honey jar jumped off of the tree when nobody was anywhere near it and shattered so it will be no more - that's of course, is one reason why it's nice to get these two new ones.

Then last night I went to a lovely post-Christmas dinner with women friends and my friend Nelia presented me with this fabulous female beekeeper to grace my tree for years to come: 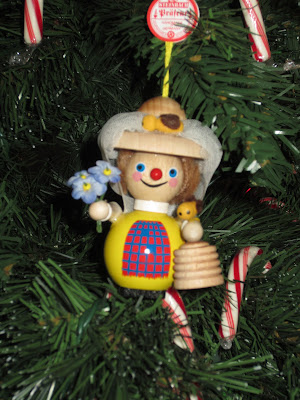 She was made in Germany and is a woman after my own heart - she has a bee in her "bonnet" and a bee on her arm.  Since I'm not in the mountains any longer, I put her on my Atlanta tree so I can enjoy her for the next few days until I take the tree down here.  I only decorate that tree with candy canes so that my grandkids can take one home each time they come over, so this little beekeeper really stands out on the tree.

Email ThisBlogThis!Share to TwitterShare to FacebookShare to Pinterest
at 4:41 PM No comments:
Labels: christmas ornaments

I saw this on Facebook and thought it might be useful for some of you out there.  Here's a convenient list of stocking stuffers for Beekeepers:


ApiNews this week included a link to a video by Dean Stiglitz.  Dean ran the Treatment Free Bee Conference that Julia, Noah and I went to this summer.  He is also the author with his wife Laurie of the Complete Idiot's Guide to Beekeeping - which is a great book (so far--I'm reading it cover to cover this winter and am not through yet.)

Dean gave a version of this talk at the conference in Massachusetts.  The slides in the video that I am sharing in this post are a little off - don't know what was wrong in the YouTube video - but you can make sense of them anyway.

He obviously had a very short amount of time to give this presentation, but he did a good job of explaining how the drone's genetics work in the mating with the queen. 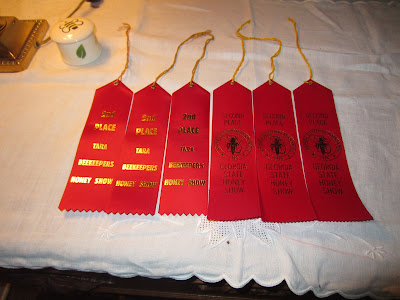 So, we'll see next year.  Maybe I'll enter the wax block, but probably skip the honey entries for next year.
Email ThisBlogThis!Share to TwitterShare to FacebookShare to Pinterest
at 7:58 PM No comments:
Labels: honey contest, pouring a wax block, wax block

At the Georgia Beekeeping Association's fall meeting, Gina, my friend and president of Metro Atlanta Beekeepers, and I volunteered to write the monthly newsletter for the association.  We came up with a basic formula for what we wanted to include and began with our first issue in October this year.

We now have done three issues and are getting good feedback.  The issues are not only sent out to the registered GBA members, but also are posted here, if you'd like to see what we are doing.

Here's our plan for each month:


We figured that if we had a basic plan, then we wouldn't have to reinvent the wheel each month.  We ask everyone only to write a paragraph or two to take the pressure off.  However, most people write us more than that.

So far, so good....but this is only the third month!  We have gotten pretty good feedback so far and I'm having a great time working with Gina.

I've never done a newsletter before.  It's a lot of work.  Literally, we pushed "Send" today to send out the December issue, and Gina said, "Whew.  Ok, now what are we going to do for January?"  And it will take that long to get enough articles and information to do our next issue.

We're hoping our newsletter will help promote beekeeping in Georgia and maybe up the membership of the state organization (it only costs $15 to be a member of the GBA).  I've noticed that the presidents of the three bee clubs we have featured so far are not members of GBA!

We're open to ideas or suggestions.  If you go to visit the site and read the newsletter, let me know if you have any feedback or thoughts about how it could be even better.


Email ThisBlogThis!Share to TwitterShare to FacebookShare to Pinterest
at 9:18 PM No comments:
Labels: newsletter

It's December - usually in years before Global Warming, we would actually have cold weather.  The supposed first freeze date in Georgia is generally November 15.  So far this year, as last year and the more recent warm years, we haven't had a freeze yet.

The temperature dipped into the 30s at least two nights, but still was two degrees above freezing.  The problem for bees is that if they fly out of the hive, it is usually to relieve themselves.  There isn't food to be had.

However, walking today I came upon an aster blooming happily and covered with bees! 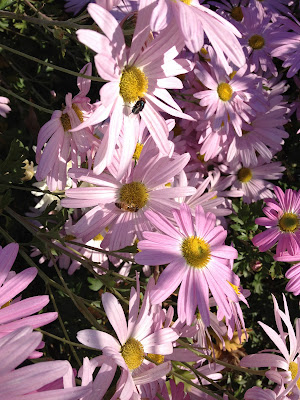 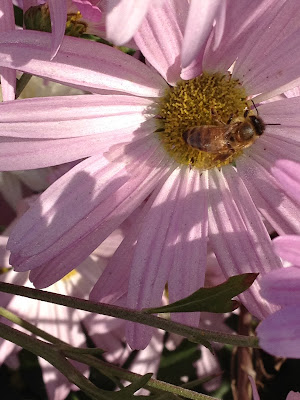 There are beekeepers all over Virginia Highlands in Atlanta where I live.  I just hope these joyful bees are mine!

For more on Global Warming, here's a TED talk: