To help me study and for whatever interest it may generate in those of you who read this blog, I'm going to share what I am learning between now and the Young Harris Institute in May, 2010. In between I'll keep posting what I am doing this winter as a beekeeper.

Today I read the first chapter in The Biology of the Honey Bee. Often people ask PN Williams from whom many people buy bees in Atlanta if his bees are Russian or Italian. I've heard him say many times that he sells "mutt bees" as do most beekeepers who sell nucs. Carl Webb in North Georgia sells Russians and is a registered breeder of Russian bees, but for the most part the bees here in Georgia are all genetically mixed up.

In Winston's book he discusses the different members of the bee family, Apidae. The honeybee belongs to this family along with the orchid bee, the bumble bees, and the stingless bees. What makes members of this family unique is the presence of the pollen basket on their hind legs.

Remember biology? Family, genus, species? The family is Apidae; the genus is Apis; and the species within the genus include: A. mellifera (the honeybee), A. dorsata and A. laborisoa (the giant honey bees), A. cerana (the Indian honeybee), A. florea (the dwarf honeybee).

Our favorite bee, the A. mellifera, probably originally developed in the African tropical regions. On its own the bee migrated to Asia and to Europe, but was found nowhere else in the world.

But people loved honey and bees, and beekeepers began moving their bees with them to the western hemisphere, Australia and the rest of the world. So now, although they are not native all over the world, honeybees are found all over the world.

The honeybees we beekeepers "keep" build nests of comb inside cavities (like tree trunks - or in hobbyist/commercial apiaries, hive boxes). While there are lots of races of A. Mellifera, these are hard to distinguish because scientists separate bee types in one way and beekeepers tend to focus on other characteristics. Scientists are looking mostly at measurable features such as wing veins, mouthpart and antenna length, body part sizes. Beekeepers look at characteristics like color, behavior, honey production, gentleness.

However mixed up they may be, we keep European races of bees or genetic combos of European races. As the Africanized honeybee encroaches on American beekeeping, bees at least in the southern regions of the country (from New Mexico east to Florida) may include genetic mixes of Apis mellifera scutellata - an African race of bee.

OK, that's all I've learned tonight - now shared with you!

On the Road to Master Beekeeper 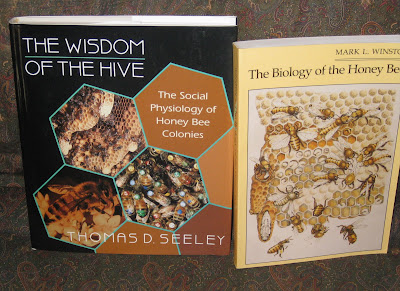 At the Young Harris Beekeeping Institute each year, there's an opportunity to earn various levels of certification in beekeeping. The Institute is sponsored by the University of Georgia's entomology department, so the people who are speaking offer a lot of knowledge and experience. I went to the Institute in 2007 and 2008.

In 2009, I had to miss Young Harris because one of my dearest friends had a surprise birthday party in Charleston, South Carolina, so I went to SC instead of Young Harris.

This year (2010) I plan to at least try for the Master Beekeeper. Here are the requirements:
Note: To do the pass-the-test part, another friend from my bee club and I are going to form our own Master Beekeeper study group to cheer each other on to get to the goal. The books pictured above are what Keith Delaplane recommends for the Master Craftsman Beekeeper in addition to First Lessons in Beekeeping. They are The Biology of the Honey Bee by Mark Winston and The Wisdom of the Hive by TD Seeley.
So at this point, it looks like I need to do something else in the eighteen sub-categories just above - like publish an article in a bee magazine, get some more certified bee-related training, or get asked to appear on local radio or TV.....
and
I need to pass the test.

The Metro Atlanta Beekeepers will offer a short course again in January 2010. The course is invaluable for getting started in beekeeping. Here's a link to the information about the short course.

If you live anywhere near Atlanta and want to learn about beekeeping, please come - I took it before I got started and it made a huge difference to hear real people talk about their beekeeping rather than just reading information in books.

There will be great speakers, a honey tasting, good lunch and discussions. I'll be there, too. It's my job this year to put together a table about how to do a hive inspection. We'll have a slide show running continuously on a computer to show you the aspects of an inspection.

Please come - you'll learn a lot and it will be fun.
Email ThisBlogThis!Share to TwitterShare to FacebookShare to Pinterest
at 9:40 PM No comments:
Labels: Short Course

Several of you who are used to getting at least weekly posts from me have emailed to find out if I am OK. I'm sorry for the gap in posting. I had a death in my family and have been in my hometown of Natchez, Mississippi several times in the last two weeks.

I am back in Atlanta now, though, and will be back up and posting on my bee blog.

Thanks for checking in with me.

Linda T
Email ThisBlogThis!Share to TwitterShare to FacebookShare to Pinterest
at 9:31 PM 3 comments: