While wandering around various bee sites the other day, I found this post about how to build a swarm trap from two flower pots. The idea originally came from the Complete Idiot's Guide to Beekeeping by Dean Stiglitz and Laurie Herboldsheimer. I admire Dean and read his posts gladly when he posts on Beemaster.com.

At first I was defeated by the unavailability of these pressed fiber pots in Atlanta - that's right - in Atlanta. The big nurseries use them to pot their trees and rosebushes but are unwilling to sell them. I found everything else at my big box hardware store, but ended up ordering the pots online. 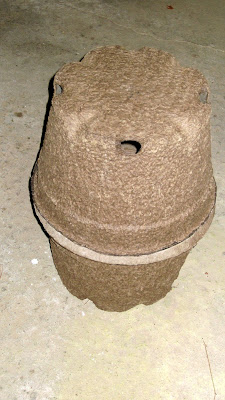 Jeff and I built three swarm traps today. The whole operation takes about 15 minutes, not counting the time it takes for the goop that you use to fill the holes to cure. 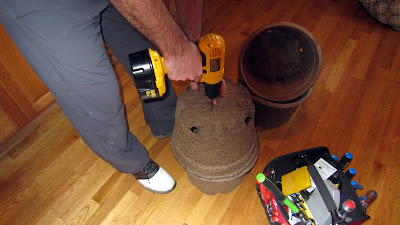 First we drilled two holes in the pot that would be the top to put a cable zip tie for hanging. I confess it took me several tries to find the right size drill bit, but once that choice was made, we were up and running. I threaded the cable zip through the holes from the inside, fastened it on the inside, and we had a handle/loop for hanging. 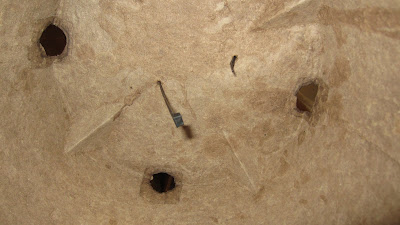 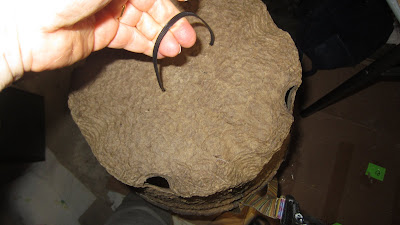 For bait I put two pieces of old comb into each swarm trap. I also smeared the inside with homemade swarm lure (a recipe I posted several years ago) and shook some lemon grass essential oil into it as well. 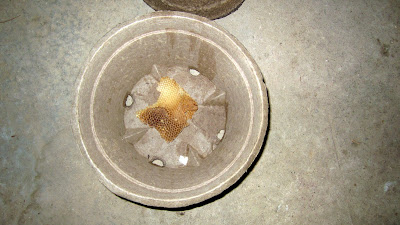 Then we put the two halves together and Jeff screwed them together with 1 1/4 inch screws. 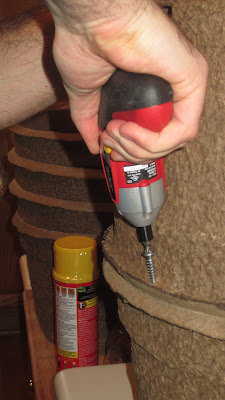 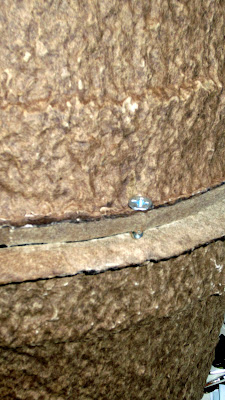 Then we went out on the deck (Jeff and Valerie live in my old house where the bee hives used to be - if the area where we are looks familiar to you) and used this goopy stuff to fill all the drainage holes but one. The open hole is supposed to provide an entry for the swarm scouts (first) and then the bees. 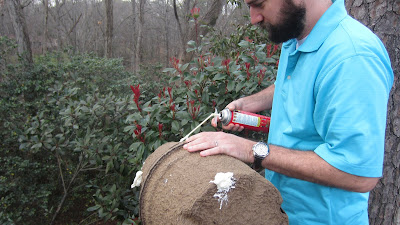 Since I've caught a swarm on this deck every year since I began beekeeping, we thought we should hang one on the deck. Also if Colony Square does swarm, this might be a place they would go and I wouldn't lose my precious bees!

It was too cold to make another nuc today so we put off another foray into Colony Square for another few days. 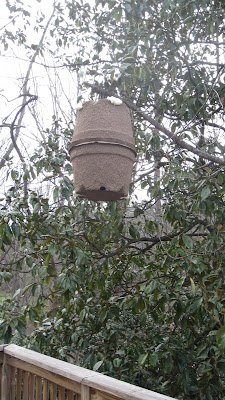 I do hope at least one of the three traps draws a swarm.  I'm putting the other two in other places - one at my house and one at the Blue Heron.

Jeff and I decided that hanging this up is a little like fishing - you might not catch a thing, but the process is really fun!  If we do catch a swarm in one of these, we'll unscrew the four connecting screws and dump the bees into a real hive.