Sorry I left everyone hanging.  I'm in one of those periods of my life where I have volunteered for way too many things and all of them are growing in unexpected ways and all of their due dates seem to be coinciding.....in the last two weeks.

I watched the hive with the queen includer for several days after my last post.  Bees were going in and out as if normally they would.  Then over the weekend, about Sunday, I realized that the bees had absconded, despite my efforts to contain the queen.  Oh, well, I thought, they will die somewhere.  And what a shame since this was a powerful swarm hive at the beginning of the season.

Someone commented on my previous post that maybe it was a small hive beetle problem .  Mostly bees that are strong hives keep the small hive beetle contained in the top of the hive.  This hive had done that as well, and I had seen a normal (for Atlanta) amount of SHB in this hive, smashed them with my hive tool, etc.

However, if you have a small hive beetle problem of any level and open the hive unnecessarily, then every time you open it you break whatever propolis trapping the bees have devised to keep the SHB on the inner cover.  I opened this hive and allowed it to be filmed when the Weather Channel came two weeks before the crisis and then the following weekend, opened the same hive to be filmed for PBS for their show, Growing a Greener World with Joe Lamp'l.  So if the SHB were contained before, in the two previous weeks, they had the opportunity to run amuck.

Realizing that for whatever reason the hive had indeed absconded, and I assumed the queen had gotten thin enough to slip through the queen includer, I then noticed robbing beginning.  There was at least one super of honey on the hive and since it was five boxes tall, plenty of other storage places for honey that they might not have taken with them.

On Monday night I was meeting friends for dinner.  I stopped at home to let out the dogs and robbing was happening in a crazy way at the absconded hive.  I was so angry.  My hives haven't produced honey this year with all the rain and all I could think was YOU CAN'T HAVE MY HONEY.  I walked out to the backyard in my business clothes, threw a veil over my head, opened the hive and took off the third box down (the one heavy with honey).  I carried it into my house, bees and all.

It's still not dark until around 8 or so in Atlanta, so I put the box in my basement and at least 500 bees (looked like even more than that) began flying up to the ceiling lights.  I turned out all the lights in the basement, opened the back door, bolted the inside basement door leading into my house and left for dinner.  I crossed my fingers that the bees would indeed go outside toward the light.  (And that no human robber would find it appealing to cross the robbing bees to rob my house!)

When I returned from dinner, there were only 2 bees still in my basement and the honey super was apparently intact.

I left everything alone.  Like I said in the first paragraph, over the last month, everything I am doing has come to a pinnacle point all at once and I've felt rather overwhelmed.

Five days later, it's the weekend and I thought I should take the hive apart to save the wax from the wax moths.  I started casually throwing the boxes around.  I got to the bottom box and as I lifted it up to put it rather brusquely aside, there was the QUEEN.  She had been included and hadn't left with her children.  She had no attendants and had been alone for at least five days and probably more.

I caught her in a queen clip and took her inside and fed her honey from my fingertip.  What to do, what to do?

I went to another strong hive and made a four frame split - two frames of brood and eggs, one of honey and one of pollen.  I found some drawn comb that was white as snow and made a push-in cage of #8 hardware cloth, and pushed it into the comb, with her majesty in the push-in.  I realized later that I should have pushed her into the frame of honey or pollen, so she'd have some food at least, but I was thinking to give her an opportunity to lay.

I put these five frames into a nuc box.  I set it up with a Boardman feeder of honey and one of water, surrounded by an empty nuc box above the inner cover: 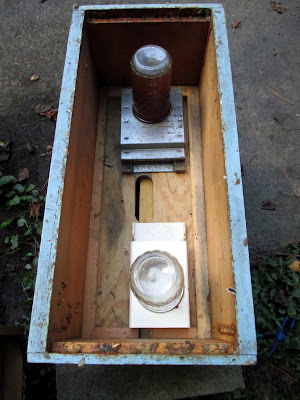 I then closed up the hive entrance with screened wire, stapled it firmly and left the nuc for three days.  This was an effort to get them used to the new queen and to let that loyalty keep them from returning to mama just in the hive next door.   Three days later I removed the screened wire. 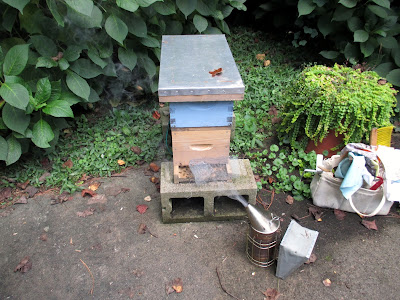 I looked inside and she had been freed from the push-in cage.  The bees had eaten the comb beneath the push-in to release her and there were eggs everywhere.  They had taken none of the honey and only a little water, but I felt good about having supplied their need should it arise.

I put an entrance reducer in and crossed my fingers. 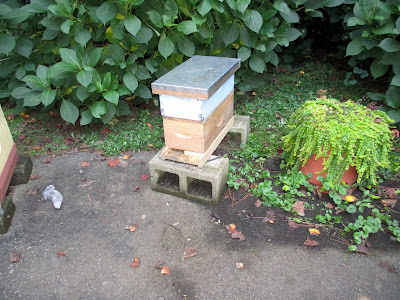 I'm so sad for the bees who left and who will inevitably die without a queen, but if this had to happen, I sure got the best of it with my queen "includer."  After all this was a swarm capture queen this year and should be strong enough in stock to make it through the winter if I'm lucky.
Email ThisBlogThis!Share to TwitterShare to FacebookShare to Pinterest
at 7:06 PM 7 comments:
Labels: entrance reducer, late year split with queen, nuc, queen includer, split