Tom Seeley and the Bees in Winter

As I look at my colonies on cold days, they appear to be completely lifeless.  Bees aren't flying in or out and the colony seems without energy.  I understand the bees hopefully are alive inside, but the miracle of what is happening in there is beautifully explained by Tom Seeley in Honeybee Democracy.

As one of the editors of the GBA Newsletter, Spilling the Honey, I just typed verbatim a long explanation from Seeley's book for our readers.  He's so clear in how he explains how the hive functions as an organism that I thought I would share it with those of you who haven't yet read his book:


"A colony of honeybees is, then, far more than an aggregation of individuals, it is a composite being that functions as an integrated whole. Indeed, one can accurately think of a honeybee colony as a single living entity, weighing as much as 5 kilograms (10 pounds) and performing all of the basic physiological processes that support life: ingesting and digesting food, maintaining nutritional balance, circulating resources, exchanging respiratory gases, regulating water content, controlling body temperature, sensing the environment, deciding how to behave, and achieving locomotion. Consider, for example, the control of body (colony) temperature. From late winter to early fall, when the workers are rearing brood, a colony's internal temperature is kept between 34 and 36 C (93 and 96 F) - just below the core body temperature of humans - even as the ambient air temperature ranges from -30 to 50C (-20 to 120F). The colony accomplishes this by adjusting the rate at which it sheds the heat generated by its resting metabolism and, in times of extreme cold, by boosting its metabolism to intensify its heat production. A colony's metabolism is fueled by the honey it has stored in its hive. Other indicators of the high functional integration of a honeybee colony include colonial breathing: limiting the buildup of the respiratory gas CO2, inside the hive by increasing its ventilation when the CO2 level reaches 1 - 2 percent; colonial circulation: keeping the heat-producing bees in the central, brood-nest region of the hive properly fueled with honey carried in from peripheral honey combs; and colonial fever response: mounting a disease-fighting elevation of the nest temperature when a colony suffers a dangerous fungal infection of the brood bees. I suggest, though, that the single best demonstration of the superorganismic nature of a honeybee colony is the ability of a honeybee swarm to function as an intelligent decision-making unit when choosing its new home."

I've heard Keith Delaplane in numerous talks explain the hive as an organism, but Seeley pulls it altogether in this paragraph.

The next time I look at a winter hive, no activity apparent from the outside, I'm going to think of the bee box as breathing and teeming with internal energy.  This makes me envious of those scientific beekeepers I know who have their hives hooked to their computers and keep records of the changes in temperature inside the hive!

Email ThisBlogThis!Share to TwitterShare to FacebookShare to Pinterest
at 7:46 AM No comments:
Labels: superorganism, Tom Seeley 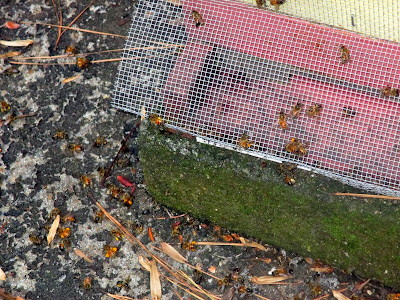 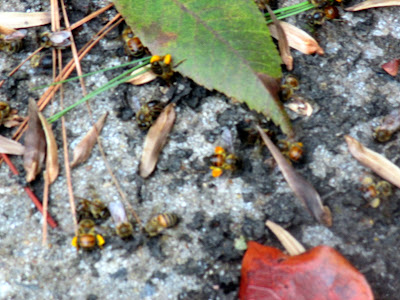 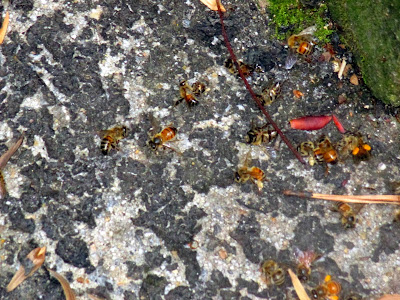