Christmas, the Winter Solstice, and The Bees

In Mississippi where I grew up we never had a white Christmas. In Atlanta, if it snows, generally it snows in February or maybe late January and once it snowed and closed the city down for a week in March (1993?). So in my life, I've never had a "white Christmas."

But yesterday on Christmas Day in Rabun Gap, Georgia, it snowed from morning to night and we had my very first white Christmas. For those of you used to this kind of thing, that probably is insignificant but I loved it. We had on the top of my mountain about six inches or so of snow by the time it stopped around 9 PM. 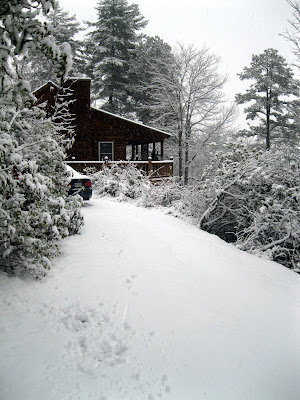 While the snow doesn't have much meaning for the bees, the winter solstice (December 21st) does. That day is the shortest day of the year and after December 21st, which marks the beginning of winter, the days gradually get longer and longer until we reach June 21st, the first day of summer. 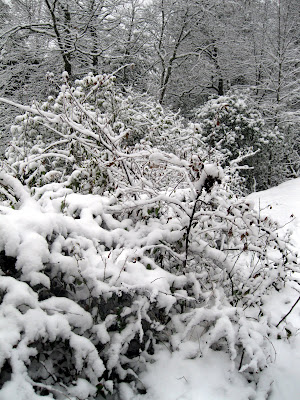 In the dark interior of the hive, unable to see that the light lasts a bit longer each day, the queen bee senses that the solstice has come. That is one of the first signs to her that it is time to take up one of the survival tasks of the hive: to begin to grow itself into a larger group of bees. Some time after the solstice, maybe the next day, maybe several weeks later, the queen will lay a small patch of brood.

The hive needs enough food to make it through the winter and if they begin raising brood, they have to keep the cluster around the brood warmer than they may have kept it in the winter cold. The brood needs a temperature around 91 degrees to survive, while the cluster only needs to be kept around 70 degrees to survive. This taxes the hive resources.

So the queen's instinct to start laying brood has to do with the lengthening of the days as well as the amount of honey and pollen stored in the hive.

So while I am looking at snow on the picnic table in the first white Christmas day of my life, the queen is evaluating her need to build up the hive and is beginning to sense a need to lay brood. 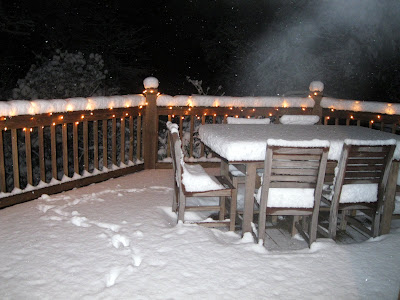 As the snow slowed, here is how the hillside looked from my deck, gazing down the mountain. 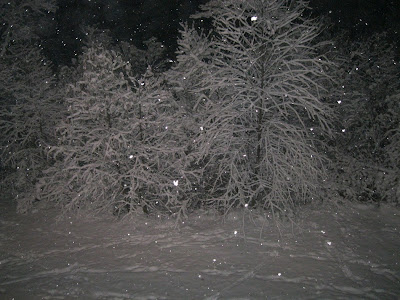 Hope all of my bee friends and all of you who visit this blog had a happy holiday!

Email ThisBlogThis!Share to TwitterShare to FacebookShare to Pinterest
at 7:42 AM 4 comments:
Labels: winter brood, winter solstice

Bee on the Christmas Tree

This is one of two adorable bees that my daughter gave me a couple of years ago. She graces our tree with her yellow body every year. 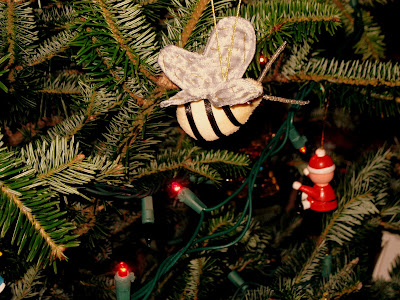 A honey jar from my friend Mary
A bee skep that is actually a vegan cookie baked for me by Blue Heron beekeeping buddy Noah: 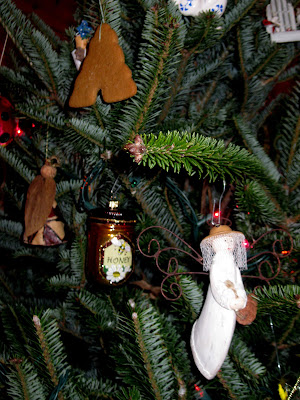 I've heard from some of you wondering why I haven't posted in so long and some of you have resorted to commenting on old posts, forced, I guess, to read old stuff since nothing new has been put up.

I suppose I could tell you that my office was burglarized and my laptop and external hard drive (my backup) stolen and that I have been underwater since Thanksgiving trying to put my "real" job back together.....but (although the story's true) it sounds a little like the dog ate my homework, so I'll just apologize for the gap in posting and take up my blogging again with my usual commitment!

I decided to make lotion as a last minute Christmas gift for stocking stuffers.  I had some red palm oil.  The last time I made lotion with red palm oil, the lotion was bright yellow and a little too oily, so I changed the recipe a bit to make it better.

Below you can see the oils all melting together.  The shea butter is the last to liquefy. 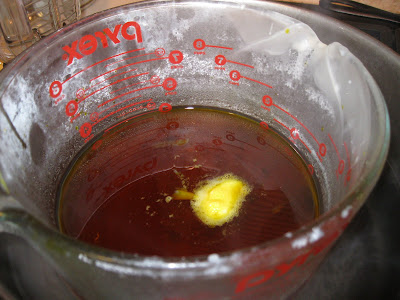 I melted the wax this time in my Presto pot - much faster.  However I always forget how long it takes lotion to cool and thicken.  I started at 7 PM and wasn't jarring the lotion until 12:30 at night! 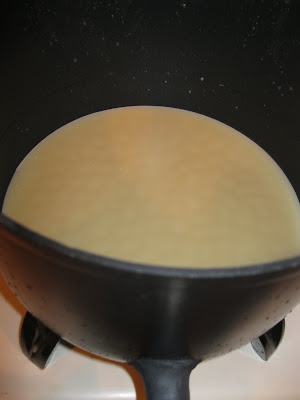 I always use chopsticks for stirring.  This results in a cheap (free if you don't count the cost of a Chinese dinner), disposable piece of equipment. 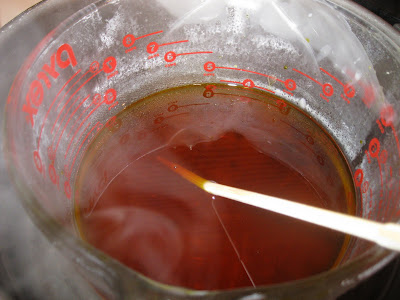 Here's the bright yellow lotion, cooling in the running blender for HOURS and HOURS....until, like I said: 12:30 AM.  I used lemongrass essential oil to give it a good smell and it turned out quite lovely. 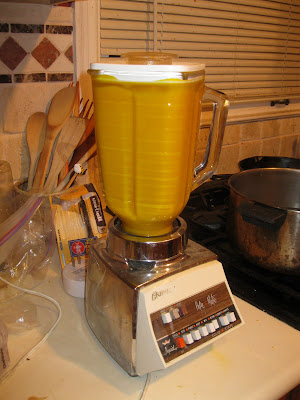 In preparation for going to the mountains for Christmas, I took the tops off of the crystallized honey from Topsy and this is what I found:  totally crystallized sugar with ants caught in the sugar.

How do you imagine the ants got stuck there?  They certainly died a sweet death, but it's hard to imagine the crystallization happening so fast that they couldn't escape! 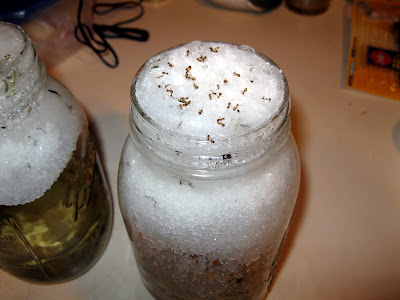 Here's the camera on another setting viewing the stuck ants....their feet encased in crystallized sugar. 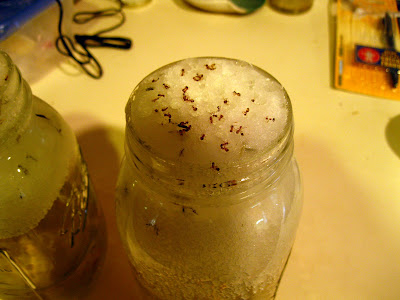 The other jar looked about the same.  This is why I am now adding lemon juice to the bee tea.  The chemical result is that the sugar syrup doesn't crystallize. 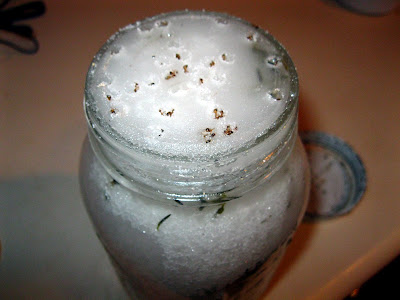 I have not put food on Topsy since after Thanksgiving.  It has been extremely cold in Atlanta - in the 20s most days - so I wasn't thinking the bees would be able to move around.  We are about to go into January and February when the bees are most in danger of starving so I have my fingers crossed for my hives. 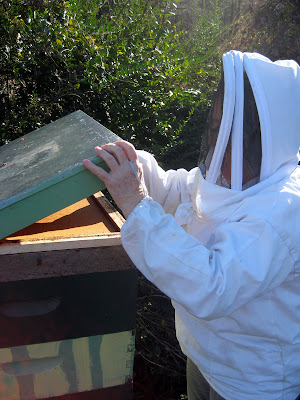 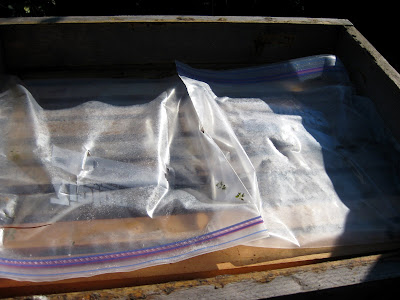 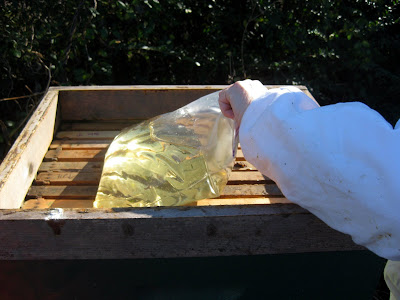 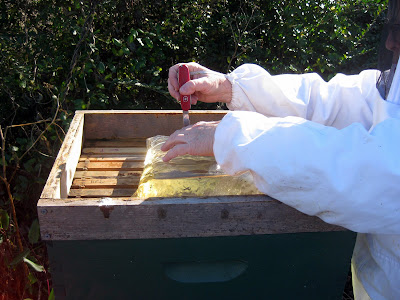 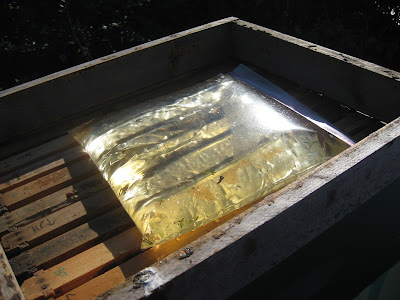 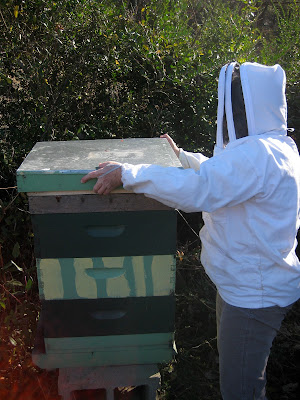 Bee-ing that it is holiday time

I'm always on the lookout for bee-themed holiday gifts.  Here are some pages I've found that speak to me - maybe to you too:


And then there are the good deed gifts one can give with honey bees as the theme.  Every year I give each of my nieces and nephews gifts of beehives from the Heifer Project.  They have everything in the world they need and this gift makes them part of keeping bees going (and underprivileged nations going) throughout the world.
Then there are ornaments for your tree decorating found
You can have your own fun looking - I googled "honey bee ornament" and "beekeeper ornament."
Email ThisBlogThis!Share to TwitterShare to FacebookShare to Pinterest
at 8:33 PM No comments:
Labels: christmas ornaments