Gonorrhea and the Varroa Mite

Today in my iPhone news source this article appeared. I read the whole article with interest because of my interest in the varroa mite and the "treatment" that is regularly recommended - no, pushed with great guilt-induction down new beekeepers' throats.

The title of the article is

Wherever you are in the world, time is running out for treating gonorrhea


The point of the article is that bacteria that cause gonorrhea are growing increasingly resistant to all drugs available for treatment. In the United States, the article says, cases of gonorrhea rose 50% between 2006 - 2015. And at the same time, the bacteria are growing more and more resistant. The future does not look good for new gonorrhea cases.

Beekeepers keep treating the varroa mite and it doesn't go away. Instead, we are developing a stronger and stronger varroa mite. As we proceed to treat the varroa mite ineffectively, we are in grave danger of finding ourselves with a SuperVarroa Mite. And the varroa mite will be just like gonorrhea with NO EFFECTIVE TREATMENT.

As treatments are tried, the varroa mite gets stronger and the treatment no longer works. So now everyone is encouraged to use oxalic acid. It's bad for bees (the only truly safe time to use oxalic for the bees is when the hive is broodless - and do you know any beekeepers who actually only treat in December?) and bad for the varroa mite (everybody loses - including the beekeeper who has to be extremely careful with the toxic "treatment"). Meanwhile, the varroa mite gets stronger and stronger as it lives through these efforts to obliterate it.

I have bees that survive without treatment. Mind you, all of my bees do not. My bees that die are usually swarms I catch or bees I purchase (which I do rarely) from beekeepers who treat. I do lose hives when they don't go into winter strong enough - that may be caused by varroa. I don't have confidence in the survival of a hive until it has lived through two winters. But when my bees die, it's usually beekeeper error that I can trace and tell you what happened. I am only interested in my bees that do survive because that means they have the genetics to live WITH the varroa mite.

I have kept bees since 2006 without treatment. However, I lost bees when I moved in 2011 and they didn't get moved well. I lost my very best survivor hive last summer when I made mid-summer splits too late; the splits were robbed out the day I made them and the queen was accidentally killed in the original hive. Beekeeper error, not varroa, caused the loss of that, my best hive.

Right now I have bees from a swarm I caught four or five years ago that are thriving, surviving every winter and producing honey. I made a split from that hive this spring and I hope it does just as well. I have two hives on the roof of an Atlanta elementary school that were previously kept by a beekeeper who did not treat and are now my bees. Those two hives are overflowing with bees and have been alive for at least four years with no treatment. I made splits from those bees and gave away queen cells to a friend of mine so we can have continued treatment free bees.

I also have a swarm in a top bar hive. The swarm came from a hive that had not been opened, much less treated, in four years. I have great hopes for them. If they make it through the winter, I'll make a split from them next year. 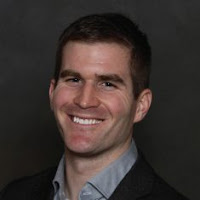 But the relationship that seems most functional to me when I think of the varroa mite and the bee is mutuality (number one on Geoff's chart). We need a bee who can live with and tolerate the varroa mite and a varroa mite that can't destroy the bee, but can still reproduce itself. That is not going to happen as we continue to help breed a stronger and stronger varroa mite.

I wish the universities would focus on how treatment-free hives manage to survive. I wish they would work on developing the strong genetics of those bees and that they would quit engaging in a process to develop the SuperVarroa mite, which is what they are doing now.

But you and I both know where the money comes from for university research. It's from Big Ag and not the backyard beekeeper. So the focus of university research is on bee survival for pollination of the almonds and other crops at whatever cost, rather than looking at balance in the beehive.

I went to another talk at Young Harris entitled The Top 10 Best Practices in Modern Beekeeping. The speaker began talking right from the start about varroa mites. More than midway through the talk, he never had moved into whatever the other nine practices were.

It would be encouraging if interest were expressed in why surviving hives make it through the winters rather than employing shaming toward people who are trying to take care of their bees in a way that works for them and for their bees.

Where do your bees forage?

This map will draw a map of where your bees forage! This was posted on my bee club's Facebook page:

When I asked it to calculate a 2 mile radius circle for where my bees are most likely to forage, here is what it showed: 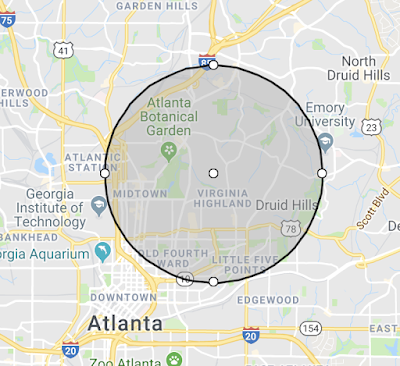 I've known that they are likely to forage at the Botanical Garden since it's only a couple of blocks away, but it's fun to see where they might gather nectar and pollen. Since bees can go about 3 miles away, you can imagine the boundary extending even further, but if I were my bees, I'd stop at the Botanical Garden!
Email ThisBlogThis!Share to TwitterShare to FacebookShare to Pinterest
at 5:17 PM No comments: