A while back I wrote an essay for a workshop on being changed through experience. It's cold and I hope my bees are clustering and happily awaiting spring. Meanwhile I thought I'd put this essay on my blog:
~~~~~~~~~~~~~~~~~~~~
Bee Changed

I open the hive to the steady hum of bees at work. They hardly notice my presence because I move slowly. Slowly, that’s the key, and it’s so hard for me. I have always walked fast; managed fifteen things at once; had several thought threads running through my head at the same time.
But not when I’m with the bees.
My relationship with the bees is careful, mindful. I treat them with respect and awe and they appear to ignore me. But if I violate the boundaries or accidentally kill one of their sisters, ZING, they tattoo me with stings. I don’t want to get stung and they don’t want to die (it’s suicide if they choose to sting me). We have a silent pact.
When it’s good, I feel a zen-like peace. A hum is in the air, the fan of bee wings is all around me, and I am moving slowly as if in a dance. While I have opened up the hive and peered into their world, I am keeping the hive covered with a pillow case to maintain a semblance of their usual darkness, and I am lifting frames of honey and bees like a slow-motion movie.
When I walk around my neighborhood, I watch the plants and flowers. Are the bees interested in these? I wonder. Every year my list expands. First there’s mahonia which the bees find in early, early spring (January and early February) along with the red maple. Then other flowers make their entrances: holly, tulip poplar, blackberry. I read up on all of them, photograph them, and notice where they are for the next year. I am trying to approach the nature around me with the eye of the bee.
Sometimes when rain threatens, I watch the Weather Channel, because I am worried about the bees. The foragers can’t fly that day and can’t gather food. If there is a shortfall of rain or if we have back to back rainy days, I feel scared for them either way.
On a rainy day, I build equipment for my beehives. When I needed a shim, a two-inch tall “box” to put on the beehive to surround a two-inch tall plastic sandwich container for catching small hive beetles, I bought wood at a big box store. The sandwich box was taller than the shim I had so carefully built from boards called one by twos.  Apparently the construction industry cuts something called a 1X2 but, in reality, the board is shorted in each way by ¼ inch. I could feel my eyes filling with tears.

To complete the sandwich box small hive beetle trap, I needed a soldering iron to melt holes just the right size for the beetle to crawl into, so I went looking for one. I happened to be at a craft store and there on the shelf was a pink soldering iron with a pale green-lettered sign:  Women’s Soldering Iron. I bought it because I needed it but felt hot anger on the inside.

When I don’t know what I am doing with the bees, I reach out to beekeeping people all over the world. I post photos and worries on my beekeeping blog and people from as far away as Denmark and Greece answer me. I have friends in all the states who know me from my blog. When I finally met Michael Bush, a dear hippy beekeeper from Nebraska and one of my heroes, I felt like my wishes had been granted.
When my day starts in the early morning as the sun is coming up, I go straight to the backyard to watch and listen to the bees. I stand about four feet in front of six beehives. Golden flickers stream past me as the foraging bees’ wings catch the rising sunshine. I am transfixed and transformed. I am bee-ing changed by my life with the bees.

Email ThisBlogThis!Share to TwitterShare to FacebookShare to Pinterest
at 6:39 PM 2 comments:

In Atlanta, it is finally cold and the bees are clustering (and hopefully alive). They have had countless days to fly. As is typical of January in the south, there are some blooming plants so the bees can find pollen and some nectar from outliers like Fatsia Japonica: 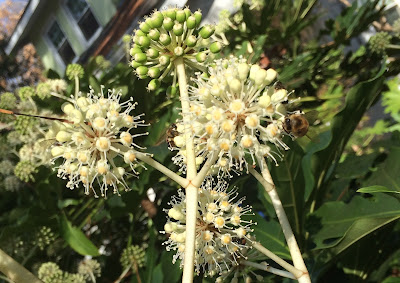 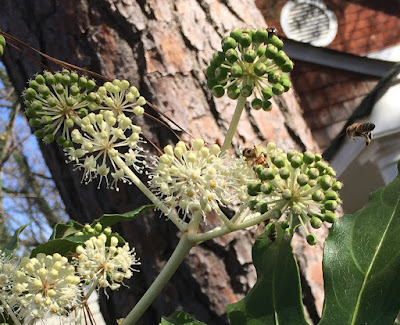 As I walked the dog, I saw camellia in bloom and the bees are often on it. Unlike the day I took the photos above, the day I shot the camellia was too cold for bees, but here is the camellia anyway: 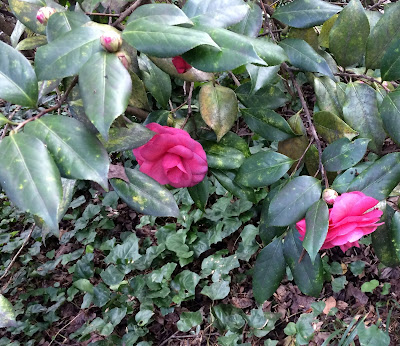 While my own rosemary is not in bloom, I saw several rosemary varieties that were: 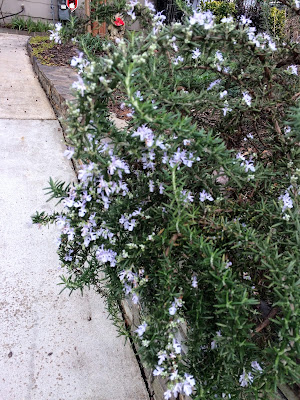 And although I didn't get its picture, mahonia is in bloom as well. I passed one in bloom while walking Hannah and thought, oh, I'll get the next one and there was no next one! Here's a photo of it from the Internet. When the bloom is finished, dark blue berries appear. The bees love the flowers and the birds love the berries - isn't nature grand! 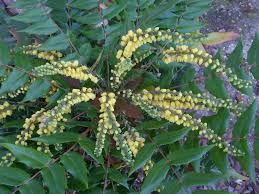