In the south, when March arrives, you know if you are a beekeeper, that swarming sweeps in with the March winds. Being prepared for swarm catching for me means keeping my swarm catching kit in my car at the ready. Here is a crossword "buzzle" that I developed about catching swarms.

If you want the answer key, email me.

This is how it looks in the GBA newsletter, thanks to Peter Helfrich, our layout and graphics editor. He is amazing: 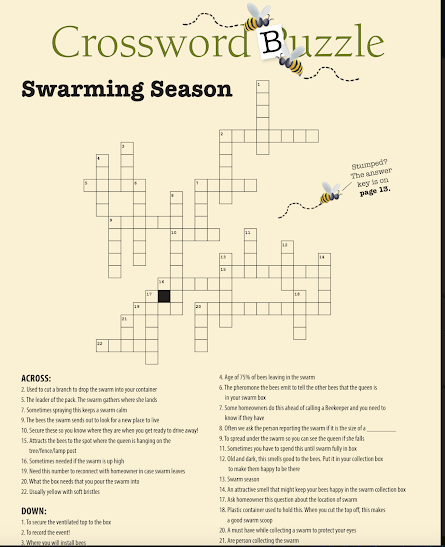 Email ThisBlogThis!Share to TwitterShare to FacebookShare to Pinterest
at 10:48 AM No comments:
Labels: collecting a swarm, crossword bee puzzle, swarm catching, swarms

It's Time to make SWARM LURE

Years ago in 2007, an Italian beekeeper shared his swarm lure recipe with me and I have made it every year since. In a good bee year, it's amazingly effective. I have just put it on my empty hives at the community garden and on my top bar hive which is empty of bees.

Next week is March and in Atlanta, that often marks the beginning of swarm season. I have drones flying in all of my hives, so I made swarm lure this week, like a good "be prepared" Girl Scout.

Put the first two ingredients in a glass jar (small jelly jar) and set the jar in a small pan of hot water. Heat until wax is fully melted. I stir with a chop stick and remove the jar from the water. I use a jar lifter which I have for making apple butter.

Let it cool only slightly and then stir in the lemongrass oil.

As the mixture cools, it will become solid but smeary. If your cubes are larger than 1X1 inch, use more oil. You want the concoction to be soft enough to smear. Sometimes I carry a chopstick to scoop out some of the harder versions of my lure before smearing it on the hive.

How to use this fabulous attractant?

For photos and a previous post about this lure, click here.
This post shows where and how to smear the lure.
Email ThisBlogThis!Share to TwitterShare to FacebookShare to Pinterest
at 12:44 PM 3 comments:
Labels: lemongrass oil, making swarm lure, old hives as swarm traps, swarm lure

My bees at the biggest survivor hive have been flying like crazy and I knew I had to either make a split or checkerboard or both as soon as was reasonable. Yesterday it was 65 at 3 PM, so I opened the hive and made a split.

I recorded it with my iPhone and wanted to share it with you. I apologize in advance. I didn't have my microphone on properly. Oh, well! It's the first time this year.

If we were watching this on a virtual hive inspection, I would pause a lot to let you see the frame not in motion. Please do this as you watch so that you can see the queen, etc. BTW, the queen is on the top center of the frame when I show it to the camera.

Here is the recorded inspection:

Email ThisBlogThis!Share to TwitterShare to FacebookShare to Pinterest
at 1:37 PM No comments:
Labels: first split of the year, making a split, splits, splitting a beehive, splitting into a nuc

What did you learn in your short course? A Crossword Buzzle

Have fun with it - pretty easy and should test your basic bee knowledge after a one day short course.

Corks and the Bees Water Supply

When I set up the bird bath, I wasn't thinking of the bees. There is water in my neighborhood - a nearby creek and feeder streams all over - so plenty of water available. But the first warm day this winter, I noticed bees in my bird bath, struggling to maintain their footing and a couple of dead bees in the water. I immediately added wine corks. Only a couple. I want the birds to use the water AND I wanted to accommodate the bees.

I noticed a very interesting feature of the corks when I was watching the bees in the bird bath yesterday.  You'll see too when you look closely at this photo: 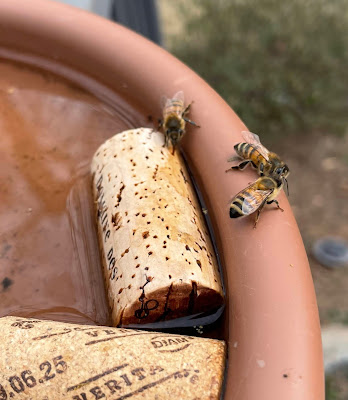 Look at the unfocused bee on the cork. Her proboscis is stuck down in the cork. She is using the porous cork to suck up water absorbed into it, rather than risk drowning by balancing her way down to the surface of the water. 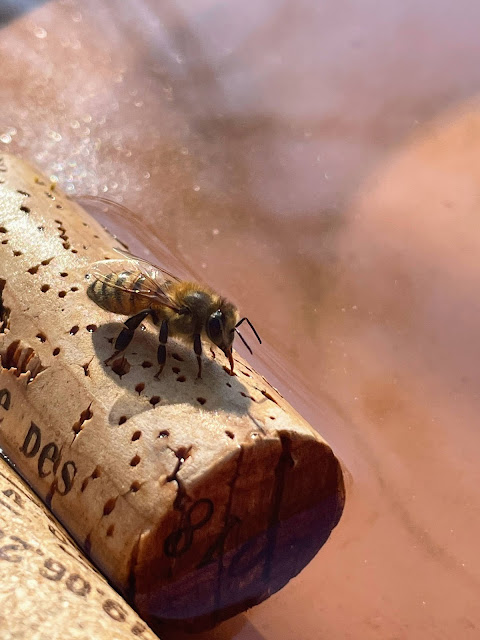 At the MABA short course on Saturday, several people asked how long is the bee's proboscis. I believe from watching them on the corks that her proboscis is a little over 1/8". This is why the plant: bee balm (crimson monarda) is not a flower that our honey bee can use as a nectar source. A hummingbird has a long enough tongue to gather from bee balm, but not the honey bee.
Even with the cork, there are bees who drown, but it at least provides a modicum of safety for those searching for water. The bees floating in the water are dead. But the ones on the back cork in the first photo look like they are winning the bee log-rolling contest. They are actually getting water between the two corks which don't move because the ice in the bird bath has glued them together. 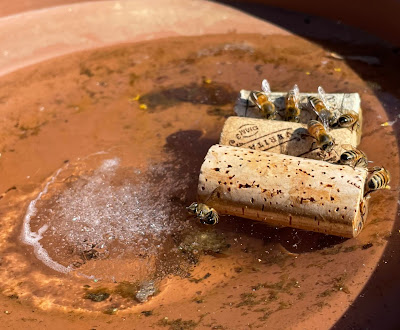 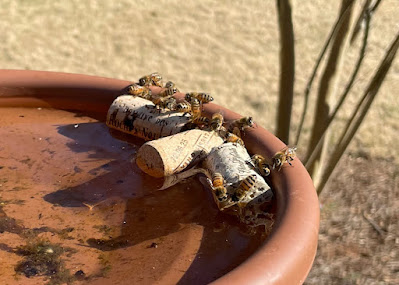 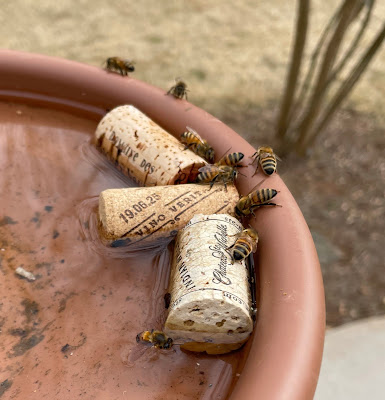