Attack of the Bee-Eater 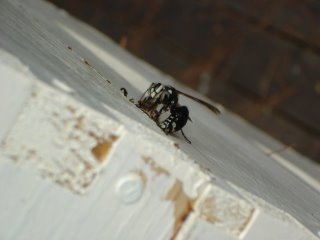 One of the sad parts of inspecting the hives is that bees are killed when I set the supers back in place. Yesterday a number of bees died during the inspection. One bee body was still caught between two supers this morning. Usually by the end of the day, the housekeeping bees have cleaned everything off.

Earlier today I saw the bald-faced hornet again. This time the hornet was carrying off a body that a mortician bee had dropped on the deck about four feet from the hive.

Just a few minutes ago, the bald-faced hornet made an even bolder move. The hornet is eating the bee body left between the supers. 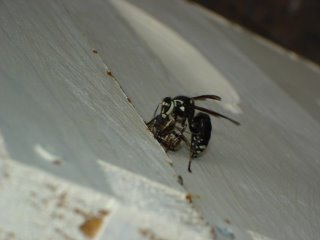 A few minutes after the hornet started eating, the bees noticed. Two bees swooped down and attacked the hornet. They are out of focus (they were really moving fast) but the red arrows on the picture indicate where the bees are.

After several swoop attacks, the hornet flew off, leaving the remains of the bee behind.

I'm concerned about the hornet's continued presence. I watched a video on Youtube about 30 hornets wiping out a beehive in a little over 3 hours. I don't know whether to worry or not.

So far I've seen one dead hornet, killed by the bees and this one being run off by the bees. 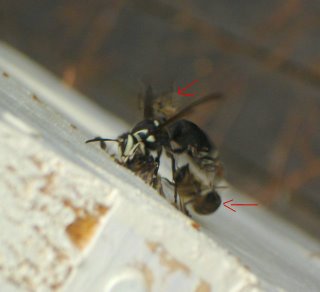 Email ThisBlogThis!Share to TwitterShare to FacebookShare to Pinterest
at 3:32 PM
Labels: bald-faced hornet