Update on Honey Frames Above the Inner Cover 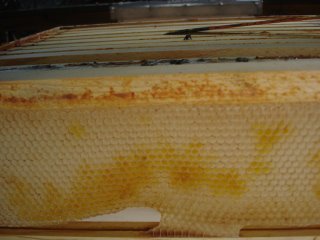 Instead they are making more honey. It's not honey I can use because I'm sure it is based on the sugar in the powdered sugar shakes I've done recently.

This first frame was the only one without honey (and it had partially filled honey before). Looks like they are storing pollen in it.

Here's a frame filled with glistening honey, which was typical of all the frames in both hives.

In the third picture, you can see the bees working on the frame above the inner cover and the bees coming up from the brood boxes below. 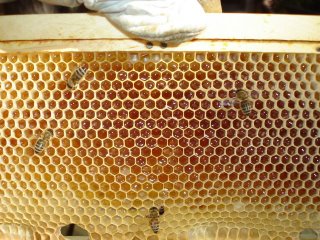 The good news is that both hives appeared to be thriving, with lots of busy bees. In Destin, I killed at least 40 SHBs - Funny, when I saw my first SHB, I couldn't make myself smash him. These I smashed with abandon. The vinegar trap in Destin had beetles dead in it as well.

In Bermuda, I didn't see a single live SHB, on the inner cover or anywhere in the hive except on the frame where the apple cider vinegar trap is located. There were dead beetles in the trap and SHBs wandering around on the comb the bees had built to fill the space on the side of the trap. Hopefully they will drown later on today!

Atlanta is a funny place, as far as temperature goes. Since October 20th our nights have been in the 30s and 40s and our days have not gone above 60 something. Today is our first 70 degree day. We are likely to have more days with high temps - I wonder how this affects the bees and this odd honey making in the super above the inner cover. 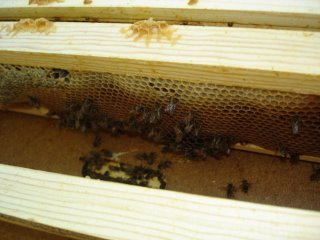 I'm going to leave it on a little longer and consult with the Beemasters to find out what they would recommend. I could harvest the honey and feed it back to the bees in January when it IS cold here.

Meanwhile this hobby brings more and more ways for me to spend money. I now need a new freezer in my basement to store the frames in over the winter to avoid the wax moth. Of course, I need to clean the basement and get rid of the old freezer first. If I end up with a clean basement, I'll owe the bees for inspiration! 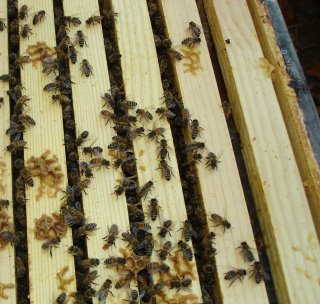 Makes me tired just thinking about it.