The Varroa Mite - Up Close and Personal 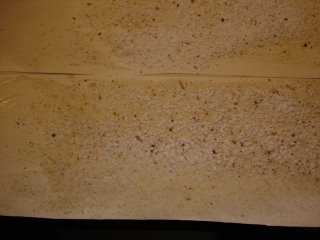 After I did the sugar shake on Saturday afternoon, I cut two strips of poster board the size of the opening between the cinder blocks on which my hive rests. I smeared them with Vaseline and slid them under the SBB on the deck below the hives.

Here's how they looked when I pulled them out 24 hours later. The white stuff is powdered sugar. Also on the board you'll see pollen, some bee parts (a couple of legs) and our friendly Varroa mite.

I tried as hard as I could to take a good picture of the Varroa mite. My camera isn't good enough in close-up, but these two pictures are the best I have of the little creature. If you double click on the picture, it will open in its own window and you can see the little critter better. You'll see that he looks like a tick on a dog. Many of the ones on the board were moving and wiggling around.

I did the best count I could and found approximately 83 mites in the Destin hive sheet and 94 in the Bermuda sheet. It was hard to count. Next time I plan to mark a grid on the poster board to make the counting easier. 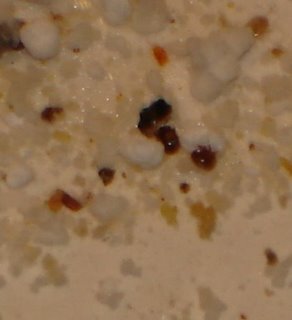 suggests a sugar shake like I did once every 10 days. That serves to keep up with the ongoing hatching and attaching of the new mites. I can't do it at that rate because I work and get home too late to do it during the week. My only open-the-hive time is on the weekends. My mentors on the forum suggested that for a while I do a once a week sugar shake.

I am convinced by this that I should start reducing my cell size next year if my hives survive the winter. Bees raised on smaller comb hatch quicker which lowers the possibility of the mites growing to adulthood in the larvae. I've read some about this on Michael Bush's wonderfully informative web site. 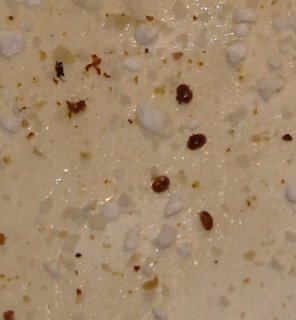 The people who determined the importance of this method of keeping bees are the Lusbys. Dee Lusby has given talks about this and written about it as well .

So I will be shaking sugar and my bees will be exceptionally clean until we stop all of this for winter and I hope my efforts will pay off with bees still alive next year.

Email ThisBlogThis!Share to TwitterShare to FacebookShare to Pinterest
at 10:38 AM
Labels: Michael Bush, powdered sugar, screened bottom board, Varroa mite