News about the shallow above the inner cover 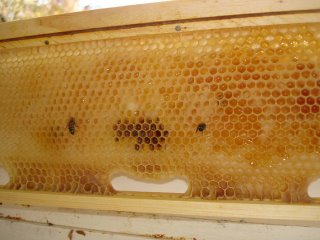 Well, it's hard to explain what is going on. In the Destin hive, the middle hive body feels heavy and full of honey. They had moved some of the honey out of the super above the inner cover into the medium below. (It was 79 degrees in Atlanta on Friday so I felt safe to open the hives).

As you can see they stored pollen in one of the frames. In one frame it looked as if they were raising brood (above the inner cover???). 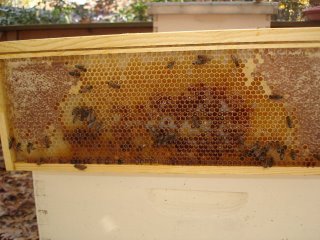 In Bermuda, they had moved very little honey into the lower hive bodies and the medium hive body on Bermuda felt lighter than the one on Destin. The last two pictures are from Bermuda where they appeared to have capped some of the honey but have not moved much if any.

I left both supers above the inner cover. I'll consult with the beekeepers at the Metro Beekeepers meeting on Tuesday and see what they advise. I believe anyone would say that it's a relative decision. If the bees appear to need the honey, then leave it there. If not, take the super off.

I plan to leave the supers above the inner cover a little longer. In Atlanta we have days with temps above 65 interspersed throughout the early winter, so I'll get to go back in the hives again, probably after Thanksgiving.

Hope everyone has a good Thanksgiving. I'll not be posting to the blog again until after Thanksgiving unless some exciting bee news comes my way while eating turkey! 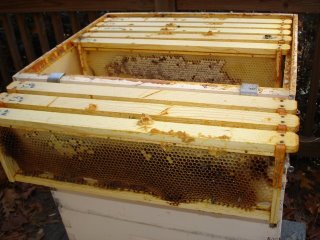 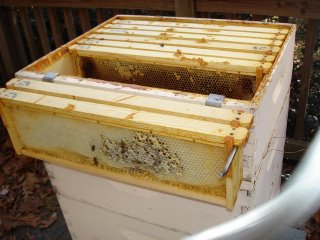