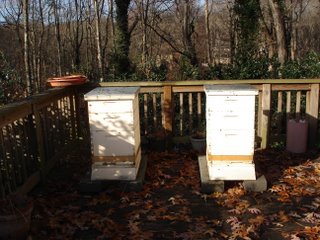 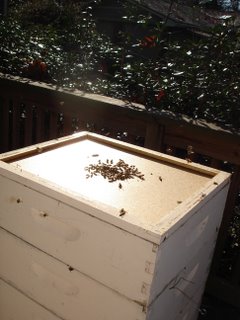 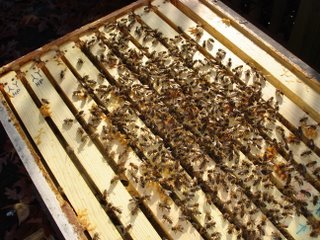 We've had warmer days so I wanted to go into the hives before the cold weather moves in tonight. It's about 60 degrees this morning, so I decided to inspect the hives. Destin had a lot of bees on top of the extra super that is above the inner cover. I looked through the super and found that the bees have moved more of the honey down into the hive (or consumed it). They seemed to be storing pollen there, which is also important for their lives. I wanted to move this extra super back below the inner cover.
I only saw one small hive beetle in Destin and there were no bodies in the vinegar trap, but I refilled the trap with new vinegar anyway and put the hive back together with the extra super below the inner cover. 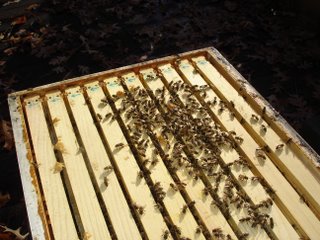 In Bermuda the bees were busy and angry that I had opened their cover. I didn't use smoke today. When the bees are smoked, they engorge themselves with honey and it didn't make sense to me to encourage them to deplete their winter stores for my comfort. It wasn't too bad - they flew around my veil more than usual but didn't seem particularly attacking.

The vinegar trap in Bermuda contained about ten bodies. I poured them out on the deck rail - maybe birds will eat the bodies - and refilled the vinegar. I saw about 4 beetles in Bermuda that I squashed with my hive tool. I also saw about 2 on the inner cover. These are much lower numbers than before. Does the SHB hibernate for winter?