A sad winter's tale of bees

Note: Originally the pictures didn't show up in this post. I've had a terrible time since Google went out of Beta for their Blogger program. When I post pictures through Google's Picasa program, they don't show up here online. I tried today and with some effort (and signing in to my blog site numerous times) I have finally managed to get the pictures onto this posting and to make some new posts as well. 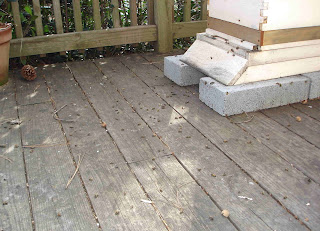 We have the luxury in Atlanta of winters that are often quite mild. This winter has been one of the mildest in memory - and I've lived here since 1978. However, we've had several days in a row when the night temperature is 25 degrees and then the temperature in the daytime rises to the 50s. I've seen very little bee activity.

Suddenly yesterday the temperature rose to 60 degrees and the mortician bees went to work. Since my hives are on the deck, the bodies are obvious and not hidden by grass. I opened the hives today and know that the bees are well and active, but the sight of this many bodies all of a sudden was disturbing. The bodies on the landing are dead bees as well as all those bodies on the deck. 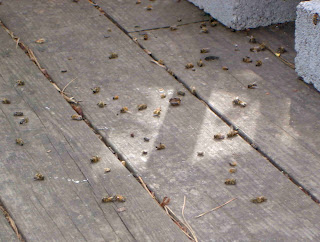 Here's a closer view of the bodies in front of Bermuda.
Today there was a lot of bee activity around 3 PM but the skies clouded up and the bees went back indoors to huddle. It will not be as cold tonight (expected low of 40 degrees F) so there may be even more housecleaning tomorrow. 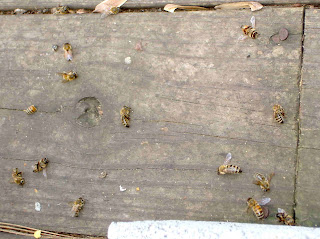 The bodies look so sad to me - their little eyes are still shining and often as in the picture above their wings are outstretched but they are as dead as can be and are just waiting for the wren who likes to eat them. Today I saw a downy woodpecker leave the nearby pinetree which grows through a hole in my deck and land on the deck itself to feast on dead bees.