Back Doors for the Bees

Since the weather is getting hotter, it's time to consider the hive's ventilation. For air circulation through the hive, it helps to give the bees a propped top. I usually find a stick to put in between the telescoping cover and the inner cover. Today I propped the tops on all three of my hives.

In addition to providing ventilation, the propped top gives the bees a back door. I do see them using it as such - perhaps it shortens the distance to the delivery of nectar when the top box (just under the inner cover under the propped lid) is where the bees are storing honey.

I also added a new box to both Proteus and Mellona. Proteus has brood in the bottom box and the medium above that was filled with almost completely capped honey in every frame. This is the box where they made confused comb. Mostly the comb is fine now and the box is almost completely capped. I want to encourage the queen to lay in the medium, so I put a new medium between the bottom deep and the honey-filled medium.

In the interest of giving these confused bees the best possible chance of building straight comb, I used Housel positioning in my starter strips and included two full frames of small cell foundation. I also wrote the name of the hive and the number of the box on the outside of each box. Proteus now has from the bottom up: Brood Box, Box 3 - new mostly SC starter strip frames with Housel positioning, Box 1 filled with capped honey; Box 2 - foundationless frames with starter strips. 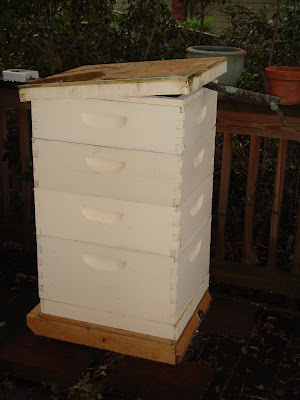 Meanwhile, Mellona is going gangbusters with honey making. Mellona, the Roman goddess of the bees, is obviously working on this hive. When I checked the status, Mellona has beautiful comb throughout the hive. They have fully built out all of the boxes, so I added a fourth. When I checked yesterday, Mellona had a filled brood box on the bottom; a medium that they drew out from starter strip frames that is completely filled, a shallow (actually painted for another hive) that is already filled on 8 frames with almost capped honey. I wanted to add another honey super - a shallow using Housel positioning, so I did that today. I also labeled and numbered the boxes on Mellona in the order in which they were added. Unlike Proteus, the boxes on Mellona are stacked in the order in which they were added. 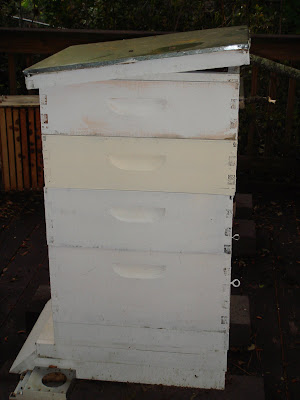 I thought someone might like to see how close Proteus is to my sunporch. This picture was taken with me standing beside the other two hives looking at the back of Proteus. 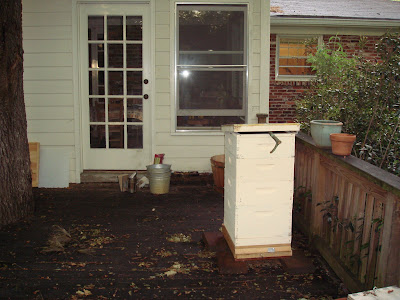 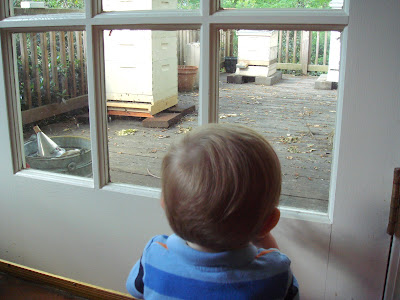 And here is a picture of my grandson who spends every Friday with me, looking out of the sunporch door from the inside. This is the Dylan's-eye view of my beeyard on my deck.