Remember that Proteus made a mess of drawing out comb from the starter strips? I had to go in and cut out bridging comb between the frames. They still are not perfectly straight in the center frames, but there was no bridging comb. I only cut a one-inch piece or two that was extending off of the edge of the frame too close to the next one, IMHO. Below is the first frame I pulled out (and thanks to my daughter, Valerie, for lending me her camera). Honey is being capped in this centrally located frame. 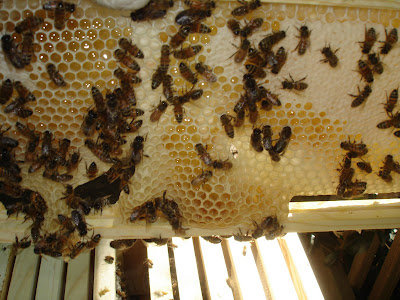 The frame below is the one that was the messiest last week. They still are not on track, but mostly are working on filling the frame. The open comb is where I cut a sticking out piece of comb off. 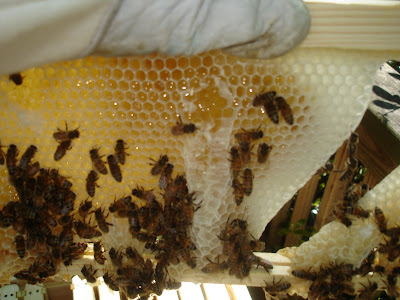 On the frames on the edge of the box, the bees are building good comb as evidenced by the picture below. There's hope for this hive. This medium box in which they made the mess is a newly built box and the frames are all newly built frames. The other new hive, Mellona, is doing a much better job. That medium box is an old repainted box and the frames are old medium frames into which I waxed starter strips. Wonder if the smell makes it better for those bees to draw straight comb? HMMM, I'll ask on Beemaster. 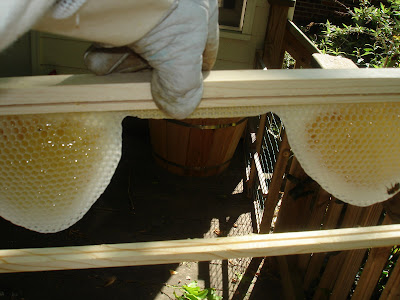