Ongoing Tale of the Small Swarm 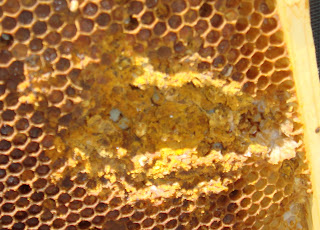 A few days ago I opened the nuc where the small swarm is housed to see how things were going. I pulled out one of the old frames on the edge of the nuc and found happy wax moths having a field day. The photo shows the damage and some of the wax moth worms. I gouged out the wax moth area from the frame, crushed it with my hive tool and threw the mess over the deck railing. I left the frame in the sun to do the rest. I then put in a deep frame with a SC starter strip 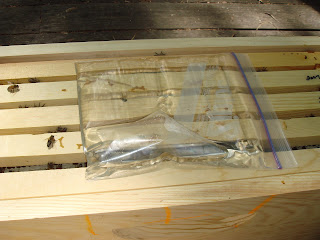 I wanted to make sure this little nuc is OK in terms of food, so I made a baggie feeder with a quart sandwich bag filled with sugar syrup and snipped an X in the top of it. With it on top of the frames the nuc top wouldn't fit on the nuc, so I took two bottom bars from unbuilt frames and laid them on each long side of the nuc. Raised up just that 1/4 inch or so, the nuc top went on. I would rather, however, be feeding them with honey in a frame so I decided to work toward that.

This morning I went out and took a full frame of honey (see it leaning against a tree) from Mellona and replaced the empty frame with that. The bees were already festooning and drawing wax on the empty deep frame - that seemed hopeful to me. They were preparing for the mated queen, I hope.

They had only drawn about a jelly jar lid sized area of wax so I hope it didn't harm the process of the hive/nuc for me to take it out. I have added to that nuc now three frames of brood and eggs and as the brood has emerged, there are empty spaces for the newly mated queen to lay on at least three frames.

There were many more bees apparent today. If you'll look at the picture, you'll see some bees who are black - those are the original swarm bees. The orange bees came from the brood frames I added to the hives. 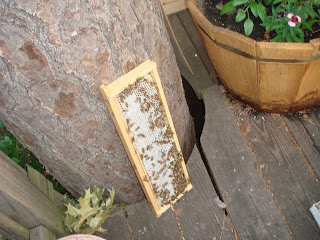 I hope the queen makes it back from the drone congregation area, wherever that is, and begins laying well in this hive. I believe the numbers would say that she should be laying about the end of the first week of June, if all goes well. 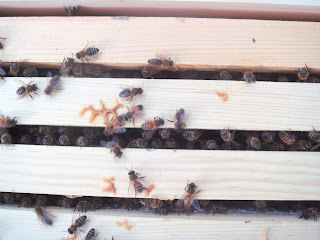