The Swarm is Making Queen Cells!

I inspected all the hives this morning - just a perfunctory check to determine which hives (if any) needed new supers. I started with Mellona. The first picture is the beautiful honey being stored on 7/11 foundation and being capped in this picture. This hive is such a workhorse. They had filled every frame in this super and I added another with 7/11 foundation for more chunk honey or crush and strain if I wish. 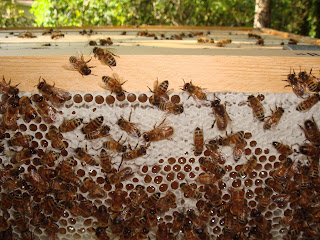 I then checked Bermuda who is beginning to move into the third box. They have a way to go yet, though. I removed two frames of 7/11 that I had put into that box last week. The frames hadn't been touched by the bees and I needed it in the box I added to Mellona. I pushed the 8 frames together and will add two more with starter strips of SC before I go to work in the morning.

Proteus continues to make creative comb, although now the bees are staying inside the boundaries of the frame. The second picture is one of the combs created by Proteus from a crush and strain comb from last year. You can see the remnants of last year's comb on the bottom bar of the frame.

A friend of mine who is deeply into mythology and ritual suggested that I have a name-changing ritual to take Proteus and change its name to something that doesn't include shape-changing (as done by the god for whom Proteus is named!) Then perhaps the hive would improve its comb-building ability! 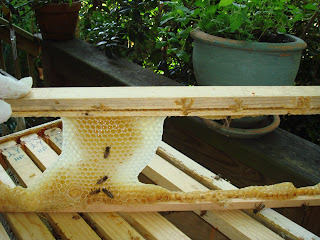 Finally I checked on my tiny swarm hive. 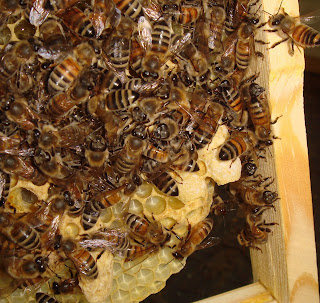 On Saturday, the 12th, I gave them two frames from Bermuda with eggs and very young brood. If they were able to start queen cells from the eggs, that should be evident by now, nine days later. I was thrilled to find open queen cups on one frame and one prominent and very big queen cell along with a couple of others that were smaller. You can see it in the lower left of the third picture. Also you can see the opened queen cups to the right.

I'm so excited that these girls are on the right track. I moved the five frames to a nuc box where they will stay until they get bigger. I've been feeding them 1:1 sugar syrup and will continue that in the nuc box. I also plan to add another frame of capped/emerging brood to increase their numbers.

In the last picture you can see the tiny nuc hive, rather dwarfed by the towering Mellona that now has four (4) honey supers on it! 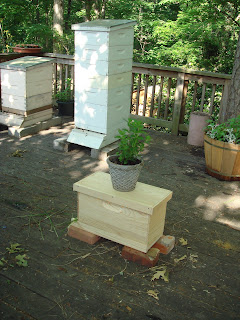