Small Swarm Gets its Own Hive Box 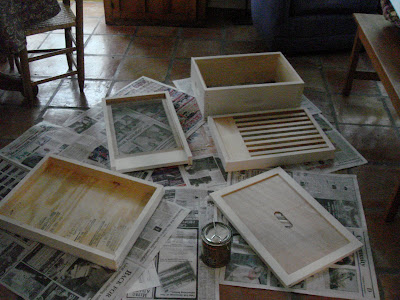 Last night I painted the hive box for the small swarm that invited itself to my deck. My plan was to move them out of the deep nuc where they have been living to a medium 8-frame box.

I moved each frame from the nuc, orienting it exactly as it had been in the original nuc. When I first put the swarm in the 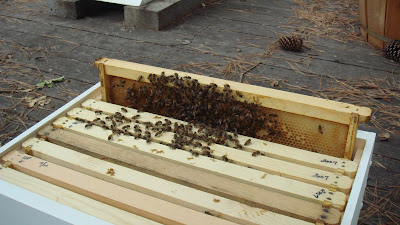 nuc, the bees were living on deep frames since that is the box they had claimed for themselves when they arrived on my deck.

I have gradually moved out the deep frames and replaced them with medium ones. One I moved because it had wax moths. Several others I moved when I added frames of brood and bees from other hives. So I thought they were living on all medium frames in a deep nuc. 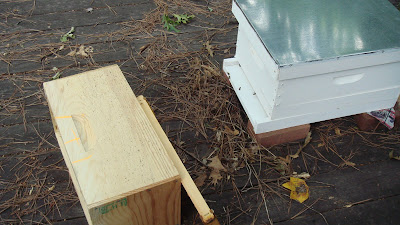 Imagine my surprise when I found that the last frame was still a deep - oh, dear. I examined the frame carefully and found that there were a few capped brood cells but the queen was not recently laying there. 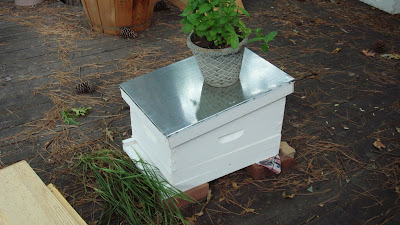 What should I do?

I went to another hive and got a frame of capped brood that was a medium frame and substituted it for the deep. I made sure I didn't get the queen from the hive where I stole the frame. To do that I shook most of the bees on the frame back into their original hive before moving the frame. I needed to get dressed and go to work so I couldn't pick over the frames as I might under different time stress. So the frame I moved also had a lot of drone cells. I hope that won't be a problem for this new hive.

I put it all together, stood the nuc box and the deep frame outside the entry to the hive, put the top on and added the mint plant which has been on top of the nuc.

So now the small swarm has its own home. I hope they will thrive there.

When I pulled the frame from Bermuda, I saw lots of open swarm cells and one supercedure cell - and I only looked at three frames. They are packed into that hive, although I've given them lots of room to grow that they are barely using. I'll need to think about how I might open up the brood box even more.