I opened the hives today to find more beetles than last Saturday. I smashed as many as I could with the hive tool. To think that last year I found it difficult to smash one - now I do it with abandon - not reckless abandon because I watch out not to injure a bee with my hive tool, but I certainly get into smashing the beetles. 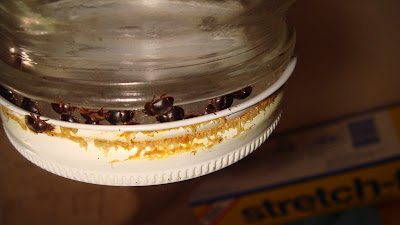 I brought in the feeding jars from each hive to refill them in my kitchen. These are the beetles around the lid of the jar. While I don't use grease patties because they are known to increase the SHB, I must say that my feeding jar experience would indicate that an explosion of SHBs occurs with feeding sugar syrup as well. So far both hives are holding their own and there is no beetle damage - just lots of beetles. 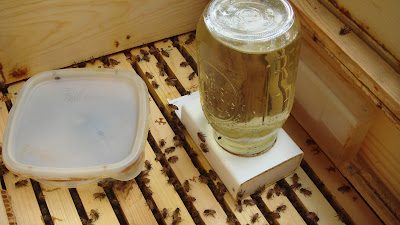 At the end of the day, I've replaced the syrup feeder with more syrup, rejuvenated the bait in the Sonny-Mel trap on the left and just looked at the few dead beetles in the apple cider vinegar trap on the right in the frame.

I also saw a Varroa mite on the back of a bee, so I did another powdered sugar shake as well. Today was a pest control inspection!