Inside the Hive Whose Queen was Dead Outside of It 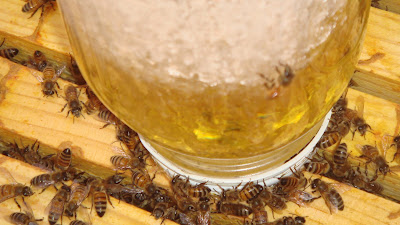 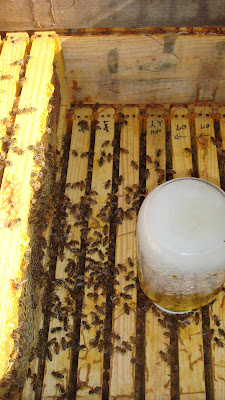 I had a break to run home for about 20 minutes today. I mixed up sugar syrup before I left for work this morning. Since I was only going to have a few minutes at home, I planned to feed the bees in the dead-queen hive to keep their spirits up. I threw on my veil and opened the hive (Bermuda) whose queen was carried dead and wingless out of the hive.

This is how the hive looked. The syrup left from before Christmas had hardly been touched. The hive was full of bees - if you click on the second picture, you can see bees between the frames. There was tons of honey still in the frames for their enjoyment.

Outside the hive, bees were flying in every second, many with pollen in their pollen baskets.

I can't look for the queen evidence until a day when I can fully open the hive, but even if there is no queen, with this many bees on January 7, I feel hopeful for requeening, etc.

I also opened for the same feeding purpose, Mellona, my other hive. There were about 1/4 the number of bees in that hive. Maybe I should be more worried about it - it seems more likely not to be thriving. They also had not touched the syrup from before Christmas.

Whatever the end result, I do have enough bees in Bermuda to give a boost to Mellona, should I decide to combine the two hives. And the bees in Bermuda look good, so I'm hoping when I get to pull a frame or two, I'll find evidence of a queen. 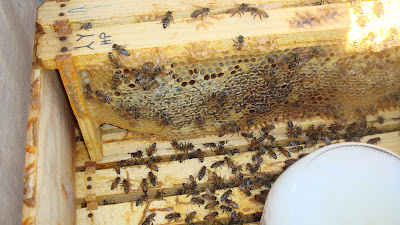 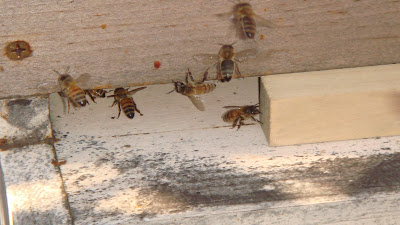