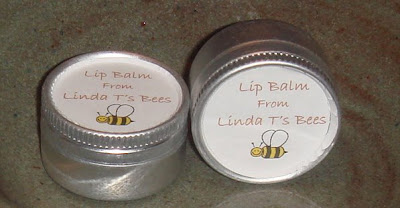 On Monday night I gave a talk to a garden club in Stone Mountain, GA on being a beekeeper. I took an empty 8 frame medium hive box, screened bottom board, super and some frames. I took a frame of pollen, a frame of partially drawn comb, and a fully capped frame of honey to show them.

The meeting was a group of men and women who were quite interested in the bees and asked all kinds of questions. I let them taste honey from my bees and gave them all lip balm in tin watch cases (see picture). I passed around a beeswax candle and let them try the lotion that I had just finished the night before. I also handed out a sheet of bee facts that I had gotten from various places.

I was a little scared since the only other talk I had given to non-beekeepers was at the Atlanta History Center in October. This garden club talk went really well and they asked good questions. As it turned out, the hardest part was finding the house where the garden club met, although now that I have a phone with a GPS system as part of it, I never get completely lost!

My next scheduled talk is on Feb 25 when I will be talking to the Henderson Mill 5th grade school garden club at their after school meeting - that should be fun.