Hive Inspection - First Real One of the Year 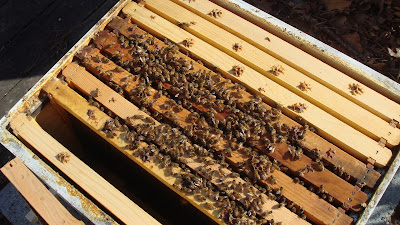 I did my first real hive inspection of 2008 on Sunday afternoon. Both hives looked healthy and had lots of bees. The bees in Mellona in the first picture were all through two boxes. The brood was all in the bottom box and had not moved up, to my surprise. The second box was still heavy with honey. 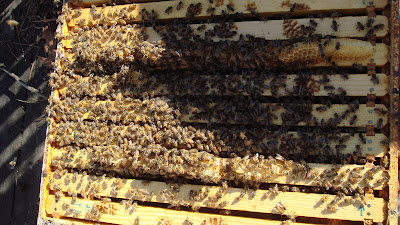 Last year at this inspection, Bermuda was a small handful of bees, with Varroa everywhere. But the queen was alive and with many powdered sugar shakes, the hive rebuilt itself. This is the hive where the original queen was cast out on January 6 this year. They obviously have a queen and are really building up. I scraped off the burr comb that you can see on top of a couple of frames. 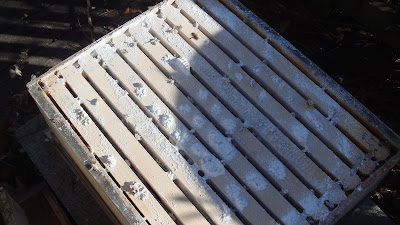 I did a powdered sugar shake on both hives today and with the DWV (Deformed Wing Virus) that I saw earlier in the month on the dead bees on the deck, I will be shaking sugar every inspection this spring. Look out, Costco, here I come! 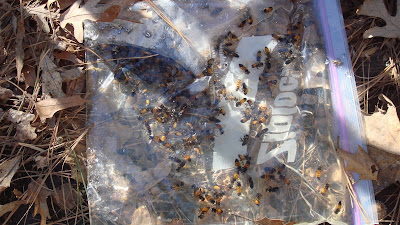 The sad news was that I had left a Ziploc bag feeder inside the Bermuda hive. There were so many bees in that hive a few weeks ago that I was afraid they would go through their stores. I knew when I put it in the hive that it had sort of folded over on itself, but I didn't do anything about it. The many dead bees I found inside it today let me (and preventively all of you) know that a ziploc feeder must be sitting flat on the frames in order to keep bees from drowning as they get the sugar syrup.