The Queen in a Nuc Gets Busy Fast

The other day I was looking at the fantastic picture on my beekeeping friend in Turkey, Halil Bilen's blog. He takes lovely pictures and although I can't read his blog, I learn a lot from looking at the pictures.

The picture below is his picture from his blog in April. I noticed that this was a comb hanging down from the top of something and that there are eggs in the comb. Now these eggs look like possibly laying worker eggs because there are two eggs in several cells. Nonetheless, the eggs in the cell in the comb hanging from the top reminded me of what I saw in two of the nucs I recently purchased. 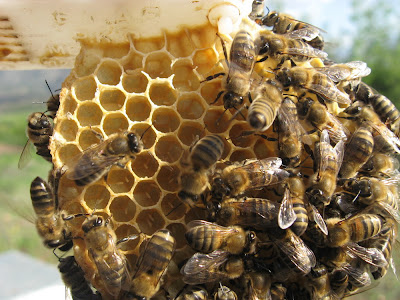 (Thanks for the use of the picture, Halil Bilen!)

In the nucs I bought, there were four frames and a spacer in the five frame nuc. The spacer was simply a board the width of a frame with nothing under it. While hanging out in the nuc, the bees took the opportunity to build comb.

When I removed the spacer before shaking the bees into their new hive home, I slid my hive tool under the comb and disconnected it from its spacer roof. I carried it into my house planning to melt it down in the solar wax melter.

After seeing Halil Bilen's picture, I found the comb I had cut off and examined it closely. In most of the cells the queen had laid an egg! The workers took advantage of the space to build beautiful comb of their own and the queen had obliged by laying in it. I hadn't even seen the eggs when I removed the comb! 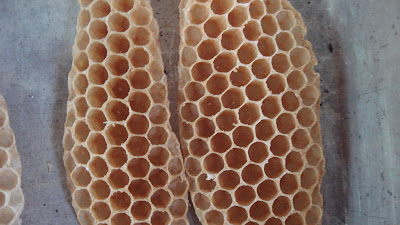 If you want to see the eggs, double click on the picture below to enlarge it, and they should be fairly easy to see, even without holding the comb up so the sun is behind you as one would do in the beeyard. I can use these combs to show the Girl Scouts what they are looking for in the hive when they look for eggs.