My goal today was to take the huge honeycomb off of Bermuda, but while I was all suited up, I checked in on each of the hives to see which one might need a new box. The Aristaeus2 hive just doesn't like popsicle sticks. If you look under my blue gloved finger, you can see that this frame had popsicle sticks as starters and instead of using them, the bees are building messy comb from the bottom.

I'm going to set some frames up with starter strips and give those to them instead. 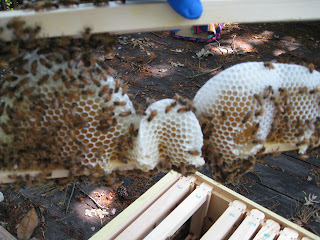 The best growing hive was Melissa (located in my yard in bright sunshine). Fartherest from the camera is frame 4 and we are looking straight at frame 3. They drew these from starter strips. 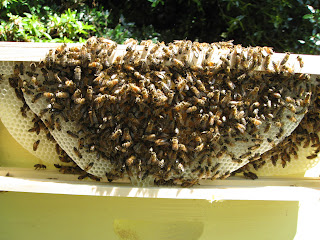 Here you can see frames 4, 3, and 2 with 2 closest to the camera. True to typical bee form, they have most built out the frame closest to the center of the box and are working on the ones closer to the edge. I know you may be wondering if this is actually a top bar hive, but this is how bees build comb when allowed to do it in their own way. Eventually they will fill out the frame and often do not attach it to the bottom bar. 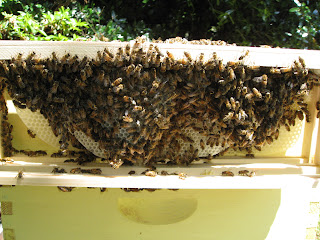 My favorite picture of the day is the one below. In Melissa, the bees were festooning in the top box as they draw out the wax. I pushed frame 7 over, creating a space between it and frame 8 and stretching this line of bees who were attached to each other "festooning" as they build wax in the frames. 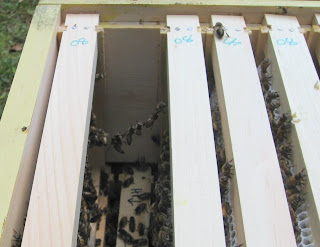