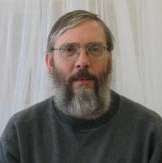 Tonight at the Metro Atlanta Beekeepers' meeting, Dr. Paul Arnold spoke to us about Honeybee Botany. Paul is a professor and researcher at Young Harris College and I have met him several times. He spoke to us last year about palynology and he was one of the teachers in the Journey(wo)man course I took at Young Harris.

He talked tonight about basic plant biology - the difference in fertilization and pollination as well as the parts of the plant and how they function. I had learned all about perfect and imperfect flowers at Young Harris. Here's a summary of my notes:

1. He described the two types of imperfect flowers: Monoecious and Dioecious. These two terms have Latin roots. Mono means "one" and Di means "two" The "Ecious" part comes from the same root as "ecology" and means "house" So if Monoecious means "one house" that refers to a plant in which the staminate and pistillate flowers are both on the same plant - like corn and cucumber. A Dioecious or "two house" plant refers to a plant that has staminate and pistillate flowers on different plants - such as holly where there is a male and female shrub or the ginko tree where there are male and female trees.

2. Bees find the flowers that they pollinate in several ways - some flowers have UV markers on their petals. Bees don't see red so if they are attracted to a red flower, it is not because of the color, but rather because of something else like UV markers or scent. Bees seek out flowers which will give them the reward of nectar or pollen. Sometimes the scent of the flower draws the bee.

3. Bees make good pollinators for several reasons. First they have perennial colonies which have large populations (lots of pollinators). Second, bees only eat nectar and pollen - they don't eat anything else and aquiring nectar or pollen results in pollination every time the bees seeks food. Bees have plumose body hairs that collect pollen easily ("plumose" means having feathery hair as bees do all over their bodies). Bees tend to stick to one type flower per trip. So if a bee goes out foraging to get nectar from the holly tree, she moves from holly flower to holly flower, rather than to two or three kinds of flowers at once. This makes it easy for her to carry pollen from one holly flower to another. Finally bees are good pollinators because the hives can be manipulated as well as moved to increase effectiveness.

4. The attractants for bees to flowers include sight: nectar guides on petals, color, pattern, and movement of the flower
and scent: the bees hold the scent memory for up to five days.

Finally he got to an explanation of my abelia.

5. Some plants, including abelia (I asked him), have "extra-floral nectaries." Looking at the trumpet shape of the abelia flower, it's hard to imagine a little honeybee sticking her body in far enough to stick her tongue in far enough to get the nectar. But as I reported in last night's post, both the bunblebees and the honeybees appeared to be getting nectar from where the flower meets the sepals.

In many flowers, the nectary is in the center of the bloom. But in the case of abelia and tulip poplar and many others, there is an extra-floral nectary. This is exactly what it sounds like: a nectar source outside the petals of the flower. This is the case with abelia and this explains why the bees are hanging on the outside of the flower to get to the nectary at its base. 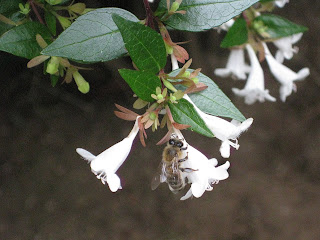 If you enlarge this picture by clicking on it, you can see that the bumblebee is on the outside of the flower, slurping nectar from the extra-floral nectary. 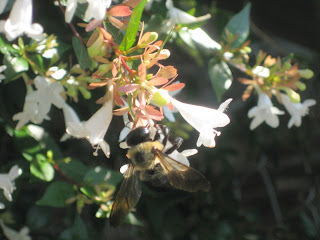