More of the Robbing Story

Toward the end of the day, the robber screen became crowded at one corner with dead bees. I'm sure the house bees who still were alive were working to clean up the mess left after the robbing. 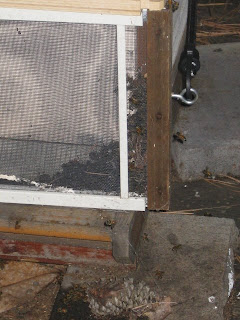 I had shut the propped top cover and had put a top bar blocking most of the access to the hive at the top of the robber screen. Bees continued to gather on the side of the hive - you can see the beginning of the gathering here. By the end of the day, the cluster was about 3 times as big as in this picture.

I determined that the clustering bees were hive foragers who returned to find the hive closed up and hung there because it was as close to home as they could get. So right at dark, I opened the top cover and propped it with a stick. By the time night had fallen, all the bees were gone back inside. I went out and removed the propping stick so tomorrow they will not have a back door, at least for a while.

After dark I opened the top of the robber screen to give about a 3 inch access space. We'll see what tomorrow brings. 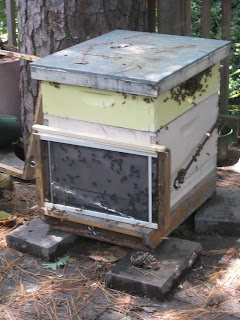