Tonight I was part of a panel called "Everything Honey." Jerry Wallace and I were to talk about harvesting honey. We went together well since he uses an extractor and I do not. I talked about four honey harvest methods: Jar to Jar, Crush and Strain, Chunk Honey and Cut Comb Honey. Jerry talked about extracting and how different honeys come at different times of the year. 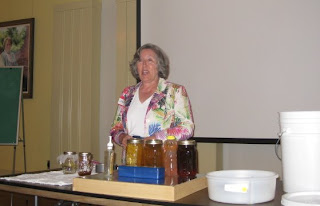 I had four slideshows - one on each topic above and I showed my video on Crush and Strain.
I'll try to post the slides in a single group later.