How the Bees Protect Themselves in Winter

When I opened Mellona on Sunday, even though bees were flying in and out of the hive for about an hour before I opened the hive, there were no bees under the inner cover. I could hear the hum of the hive but couldn't see a single bee.

I took off the first box and there they were. Their cluster was just below the top box on the front left corner of the hive box. Interestingly this corner of the box is where I always found the queen in this hive during bee season. They clustered in their "home place" in the hive. 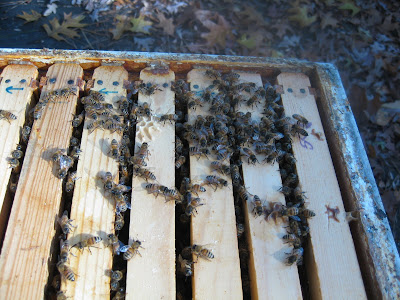 When I took the telescoping top off of Bermuda, I found the hole in the inner cover had been propolized to keep out the cold. Bermuda has the most stores of all my hives so I decided not to break the propolis, but to leave them alone until my next hive check in a week or so.

The only reason I have to open the hives in winter is to make sure the bees don't need feeding.