It's a Dog Eat Dog World in the Beehive

Upon looking closely at the ground around Persephone, in the leaves that have gathered around the hives, there are tons of dead bees. Bees and bee parts are scattered everywhere. Obviously the hive was robbed and a fierce battle ensued.

I fed this hive before Thanksgiving. Both the small nuc hive and it were needing food so I gave each of these two hives baggie feeders under the inner cover and well protected from other bees. However, during my absence for the week of Thanksgiving, both hives were robbed. The absconded nuc hive was demolished.

However, I don't know about the state of Persephone. 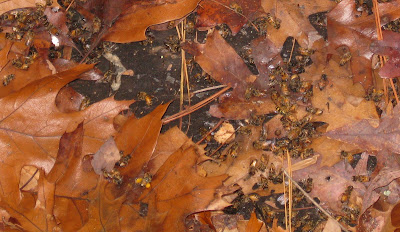 It's so sad to see bees in such a devastated pile of dead bodies. 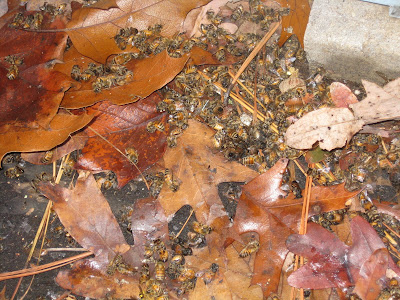 When I first looked at Persephone, the hive landing was bare and clean. At the end of the day in which I took the above pictures in the morning, the landing looked like this below. I believe there are live bees in Persephone who carried the dead to the landing during this day during a warmer moment. 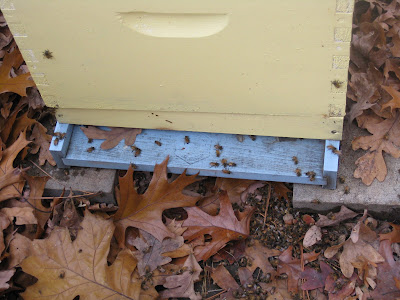 Tonight after a relatively warm day, the landing of Persephone (as is also true of all of my hives) is cleaned off. I hope the bees left in Persephone have a queen and can make it through the rest of the winter.

The feeding question remains. I fed those bees in what is considered the safest way for winter. I think I will open the hive when it is cold in the morning and add a new bag. Maybe in the cold, other bees won't notice the food and rob the hive. It is going to rain all day tomorrow so the bees won't be flying in both rain and cold.

There's hope for Persephone yet! We're almost to the Winter Solstice when her stay in the Underworld will be over.