The Rescued Nuc Hive has Died

Today at the end of the work day, I decided to check to see if the nuc hive needed more sugar syrup. I had put baggie feeders on top of the nuc box under the inner cover and top of the nuc. There appeared to be no bees when I opened the top. When I removed the baggies I could see ripped up comb and dead bees. You can see the ragged edges of comb and a few of the dead bees in the picture below. 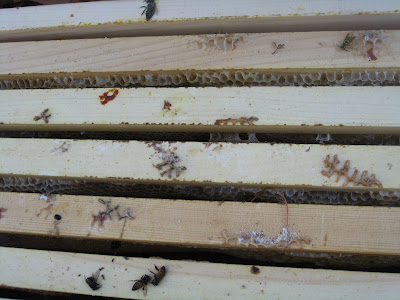 Sadly I lifted off the box and here's what the bottom board looked like. 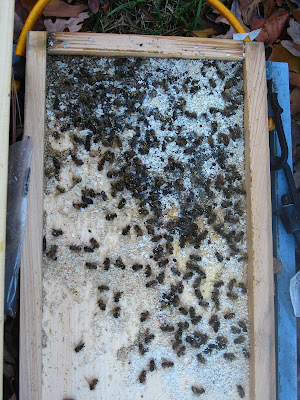 I sifted through the bodies but didn't see the dead queen although I am sure she was in the pile somewhere. The beige stuff is composed of the wax cappings, ripped off of the comb as the robbing commenced.

I wish I had been a better beekeeper. All of this destruction is because I replaced the queen in Devorah when the original queen was still alive and kicking, although not laying. I also think this is because we have had such a drought in Georgia that supplies for the bees are so low - just as the US economy is in a recession, the bees are in a depression!