The Camera: An Essential Tool in Hive Inspections

Persephone looks like a hive that is flagging. I have felt quite discouraged about it. I opened it on Friday which was a very warm day (over 65). The bees in the other three hives were going like gangbusters - flying in and out, carrying pollen. The bees entering and leaving Persephone looked like marauders - they were hesitating at the entry and seeming tentative.

So I opened the hive to see what was up. I had left a ziploc feeding bag on the top of the second box, but very little had been used. This confirmed for me what I was afraid of - that the hive had died. Then I started pulling frames.

First I pulled from the bottom box where there were no bees. This was a deep (this hive was started from a nuc last year which came with deep frames). The frame had stored honey but no bees anywhere. 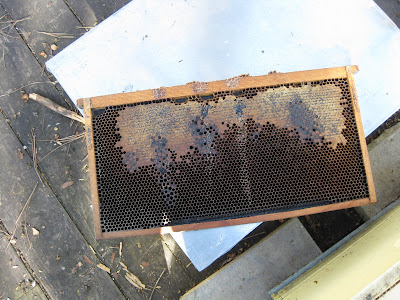 This is what I saw on the back of the frame: all of the bees in the photo below are dead, just clinging to the wax as dead bodies. Obviously I had my camera and was taking pictures so I could post here about the demise of this hive. 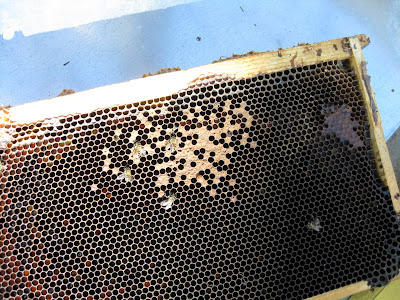 In the second box, a medium, I found lots of honey stores and a cluster of bees over about three frames - the size of a tennis ball. They were on top of honey but I saw no evidence of a queen - no brood that I could see and nothing but a few bees and the honey.

I left the hive after taking a few pictures and called Cindy Bee. "Is there a queen in this small cluster?" she asked. I told her I hadn't seen any evidence of one. She and I decided that I should combine this tiny group with another hive. She suggested that I used vanilla on the top bars of the hive I was moving the bees into to decrease the chance of rejection. And that I should do this soon so that the bees didn't die out.

I left for the mountains with the plan to combine this tiny cluster with one of the three strong hives when I returned today.

Before doing the deed, I transferred my pictures from my camera to the computer and looked at my record from the inspection of Persephone. On the first photo, you'll see bees, stored honey, lots of hive beetles. 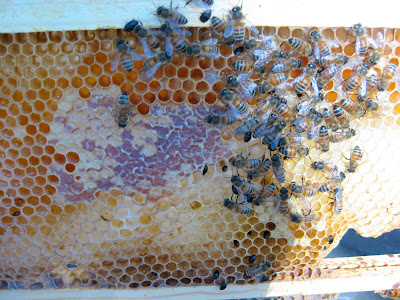 In the second photo down at 6:00, you see Her Majesty. And above her you can even see eggs and brood in the cells! 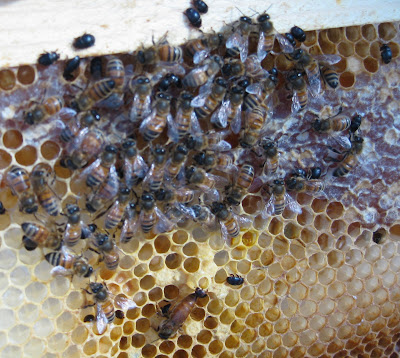 Without this camera record, I would have begun transferring the bees and lost a potential good hive. There's no way in this weakened and quite small state that this hive will amount to much this year, but I'm going to do my best to help Her Majesty make the best success possible out of this.

I of course called Cindy again to report the news. She suggested that I move this small group into a nuc hive and feed them. I'll move a frame of brood and nurse bees from a thriving hive into the nuc as well if I can be sure there is no queen on the frame!

The Hive is alive! Long Live the Queen!