Honey lasts a long time. It's been found in tombs, still in good shape. However, under certain conditions honey will crystallize. My understanding is that the crystallization happens when there are tiny particles in the honey that act as seeds for the formation of the crystals and when the temperature is around 57 degrees F.

All honey doesn't crystallize but some of my favorite harvest bottles from this year did just that. I went out of town for a week and left my thermostat on 55 to save on heating. When I returned my favorite honey had become creamed honey.

When people make creamed honey on purpose their goal is to have a very smooth creamed product. The seed grains in this honey must have been perfect because the honey was smooth and perfectly creamy. Or, as my bias would lean, my method of harvest without an extractor may result in only the tiniest grains coming through the filter.

However, at this point in the year, most of my harvest from 2008 is gone and we love honey at my house. This morning I decided to take one of the last non-chunk jars of honey and reliquify it. To do this, you have to heat the honey.

Part of what I value in my harvest methods is that the honey is never heated - the hottest it has ever been is the interior temperature of the hive. But to re-liquify the honey you have to get it to 160 degrees and keep it there for a minute or so before turning off the heat.

I put the creamed honey in a pan of boiling water. I put a candy thermometer in the honey so I could monitor the temperature. 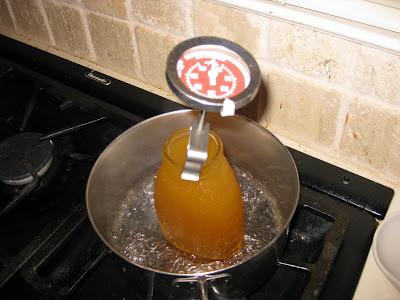 As the temperature rose, the honey became clearer. 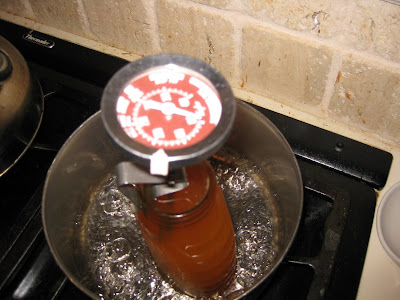 At the end of the process, the entire bottle was again liquid honey. Because I got it to 160 degrees, it won't recrystallize. What we lost in flavor from heating the honey is worth it to me to have the liquid again. 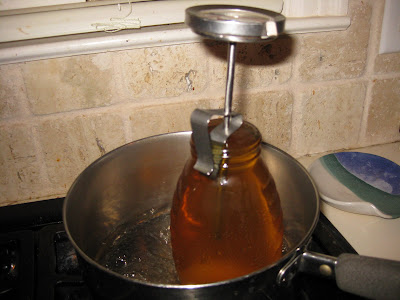 I also have some jars of chunk honey (comb in a jar filled with liquid honey) where the liquid part of the honey has crystallized. I can't imagine that this process would work for the chunk honey because the wax would melt.