As you may remember, on March 8th I put two frames of brood and eggs from my hives at home into the Blue Heron hive. My hope was that they would make a queen to make the queenless situation queenright.

I checked on Thursday, the 19, and sure enough, they had made a beautiful queen cell. I'm sorry the picture is out of focus. I forgot to put the camera on macro and I forgot my frame rack. So I didn't hold either the frame or the camera steady and it wasn't macro focused.

I went through every frame of the hive. The bottom box had all syrup filled frames. The second medium box into which I had put the brood/eggs frame also had no eggs or larvae.

Important note: I couldn't light my smoker - we've had rain for several days in a row and all of my pine straw in my yard was damp. I worked these bees with no smoke and they were calm as if they had a sense that all was well in their world. There was no queenless roar and the bees did not act angry. 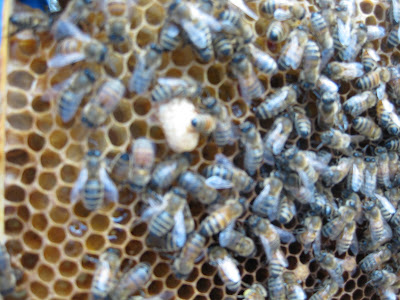 In addition to this lovely queen cell, the frame also had two opened queen cells on the bottom of the frame. I think these may have already been there, but I took again a shaky shot of them as well. 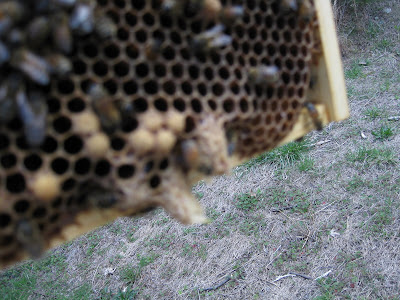 My guess is that if there were a four day larvae on March 8 on the frames I brought them, then tomorrow (Sunday) or Monday, is when Her Majesty should emerge from her cell. She'll hang around the hive a little and then go on a mating flight. Let's hope all of that happens without incident, including her return to the hive without being breakfast for a bird.

Then we might see eggs and brood in the Blue Heron hive!