Trying Out the New SHB Trap

Today I had time to go to Costco to get oil for my Freeman SHB trap. I put the oil in the trap. The tray slides out easily from the back of the bottom board. It was covered in hive debris since it has been on the hive for a week. I dumped the debris and tapped the edge of the tray against the deck rail, but as you can see, some debris is still in the tray.

I filled the tray - the instructions say to fill it half full. Since it slants down due to gravity, I actually had to fill it almost to the top on the edge fartherest from the hive in order to have enough oil in the tray. Sliding it filled with oil back into the hive was difficult. I wished that I had something the level of the opening to rest it on while I filled it. The backward slant made pushing the filled tray into the hive sort of awkward. 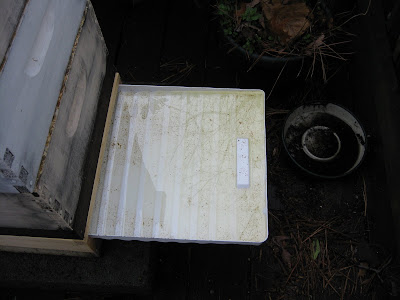 Once it was pushed in, I also followed the instruction and pulled it back toward me about 1/8 of an inch to keep it from taking on water on rainy days. 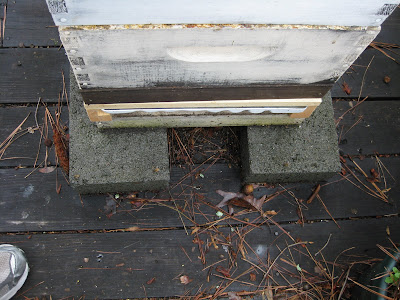 To fill the tray took this much of a five quart bottle of oil, the cheapest they had at Costco. The oil cost $6.99 so I'm guessing it will cost about $3.50 to fill a tray each time you do it. Jerry suggested getting throw-away oil from fast food places, and I am sure there are cheaper ways than Costco, but that is easiest for me, so I wanted to try it following what I would ordinarily do. 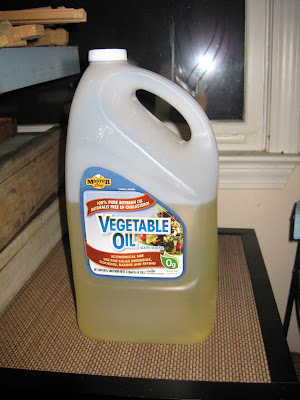 Note: I just got this email from Jerry Freeman of the Freeman SHB trap:
Linda,
From your picture, the tray is pulled too far out the back. In the proper position, it will be 1/4" inside the back and 1/8" from the landing board at the front. This sounds confusing so I'll try to get a picture of this on my web site.
Thanks,
Jerry
It's raining in Atlanta now, but I'll go push the trap further in as soon as I can!

I won't check this hive again until next weekend - I'll post pictures to see if there are dead Small Hive Beetles. Jerry is sure there will be.