What to do with Dripping Honey Frames after Harvest

After the harvest, I let the bees clean up the mess. When I've done crush and strain, the frames are all drippy with the remains of the honey. I harvested six frames, so I took them out to the bee yard in the five frame nuc that I used to carry them into the house. (See the sixth frame riding on the top of the box!)

I had an empty 8 frame box waiting for me. I had left two frames on the hive because they were not fully capped. 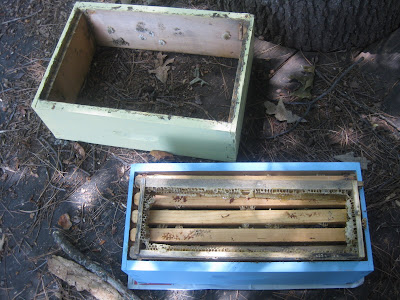 Here's a closer view of the honey comb left after cutting the comb off of the frame. First the bees will clean up the dripping honey, storing it in comb they are currently filling. Then the bees will use this remnant of comb as a starter strip to build new wax in the frame, if they are so inclined. 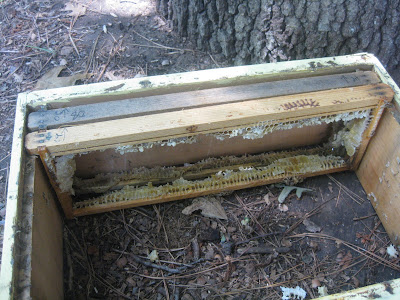 Here the box is filled with six drippy frames and there is space for the two frames left on the hive. I put those two back in their spots and put the super back on the hive. Because I sometimes get a super of honey around the Fourth of July (who knows where they get the nectar??), I put the box under the inner cover and will check it again when I'm back from vacation. 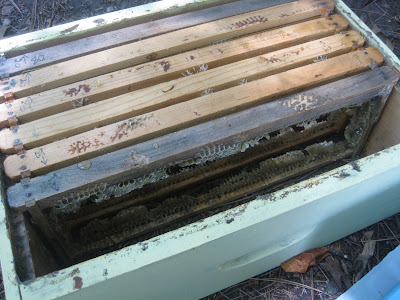 Below is my harvest from these six frames. I also bottled four queenline jars for potential honey contest entries and gave my daughter and grandson who helped with the harvest each a queenline jar. Those six jars are not in this picture. So from six frames of honey I harvested 18.3 pounds of honey. 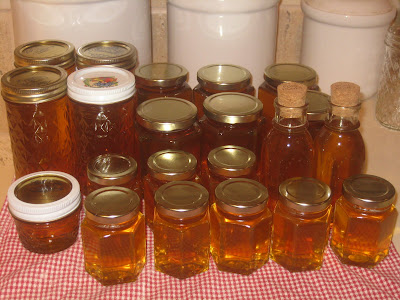 Ordinarily I don't use such a variety of jars for harvest, but this year the harvest looks meager. From a "bird in the hand" point of view, I wanted to make the most of this super, so I bottled some large bottles for family, some smaller bottles for gifts and those two cute "Muth" bottles just for fun.

They are topped with a cork and have embossed in the glass: "8 ounces pure honey" with a bee skep and bees flying all around. My friend, Julia, told me about these so I ordered a box to see how I'd like them.