Yet Another New Queen at Blue Heron and Powdered Sugar Shake

When I was last at Blue Heron, our third hive, the one the supplier gave us to replace the queenless nuc we got from him, didn't look good. The hive was not bustling with activity or bees and the numbers seemed small.

I was disappointed to find that the bees I saw on the tops of the frames had many shriveled and deformed wings, indicative of Deformed Wing Virus vectored by the varroa mite. I decided that I would return this week to do a powdered sugar shake.

Before shaking the powdered sugar, I pulled each frame to see how things are going in this weak hive. On the second frame I saw this opened queen cell. This is at least the third queen for this hive. Their first one failed and I don't think the second one was doing anything. Now they apparently have created yet another queen. Hopefully she'll be a good one. 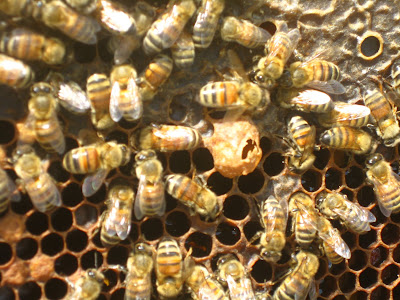 I found two frames full of eggs and brood which was reassuring. The hive had good honey stores in the deep in which they live. The box above was completely empty and I removed it to give them more security (less space to defend).

The powdered sugar shake was quite an event. Here are the bees, covered with sugar clinging to the frame. 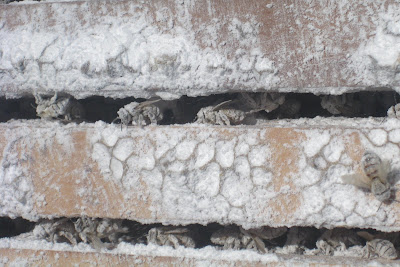 Here's how the whole box looked! 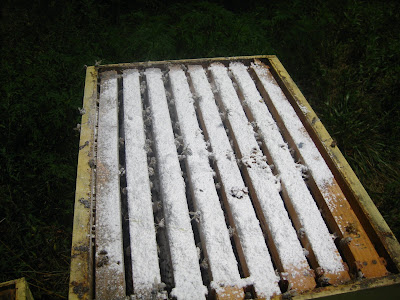 I took off the inner cover and put it on the ground and I removed the top box before doing this. When I lifted up the inner cover to set it back on the hive, the bees who had not experienced the powdered sugar shake surrounded one of their sisters to see what was going on with her and all this white powder! 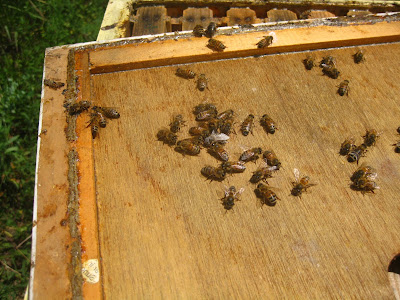