Feeding the Bees all over Town!

Because I am off to visit my daughter in Maryland this weekend, I wanted to feed all the hives that need feeding before I left. I opened the nuc with the poorly mated queen from Blue Heron and found that they had not touched the baggie I left there last weekend. I don't really understand why they have not, but I added a couple of slits to the bag and didn't replace it. 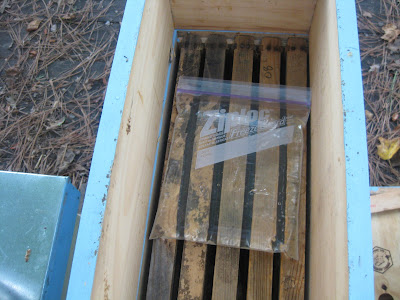 I am also feeding Aristaeus2 (the swarm hive from last year on my deck). I gave them a new bag as well. They had drained the bag from the weekend completely dry. 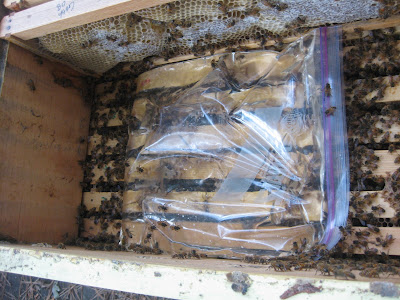 I went over to Blue Heron and opened up the Purvis queen hive. It's hard to put a baggie in without squashing bees. I've learned to lay it down slowly and gradually like a glacier moving over the frames to allow the bees time to move out from under the descending sugar syrup. 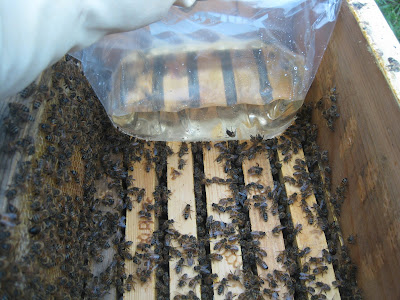 Now the baggie is fully down on the frames. I believe a couple of bees may have lost their lives in the process but it isn't as bad as it could be if I had cavalierly put the baggie on top of the frames. 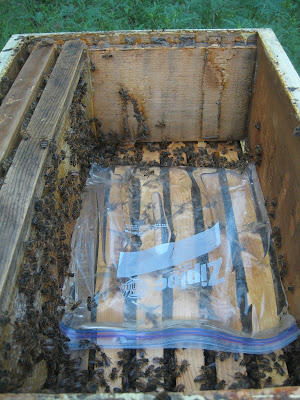 Finally I went to feed the bees at the bee tree but that didn't go so well. The bee tree bees have gotten all possessive of the hive box. This should be a good thing but not for me and my health and well-being!

I climbed up the ladder with my jacket on and well zipped (remembering the last time last week when I got stung in the head under my unzipped veil). I did have my camera around my neck sticking the strap through the opening in the bottom of the veil.

I opened the top of the box and looked at the bees crawling all over the frames under the empty syrup baggie. I pulled off the syrup baggie and the bees came at my veiled head. One came in through the hole for my camera strap. I knew I didn't want to get stung before seeing my daughter for the first time in several months.

I climbed down off the ladder and moved away from the bee tree and zipped off my veil.
Big mistake. Apparently there were bees all over me. Taking off the veil gave them the opportunity they were waiting for and I suddenly had several bees in my hair, a bee in my nose, a bee under my glasses and a stinging bee above my eyebrow. I got the bees off of my face but the ones in my hair all found a way to sting me.

At the end I had about four stings in my head, one on a significant middle finger and one over my eyebrow. So now I headed off for Maryland with a face all swollen on the left side. Thankfully by the time the plane landed 24 hours after the sting, most of the swelling was gone.

Note to self: From here on out, take a smoker to the bee tree. Those girls OWN the hive box.

Email ThisBlogThis!Share to TwitterShare to FacebookShare to Pinterest
at 6:30 AM
Labels: baggie feeding, bee tree, sting