On Wednesday, Julia and I set up these hives on our remaining cinder blocks - we put a nuc with drawn frames on top of one set of cinder blocks and we uprighted the yellow hive and returned it to its cinder blocks. The frames in it were wet and muddy but we put them in the hive all the same. 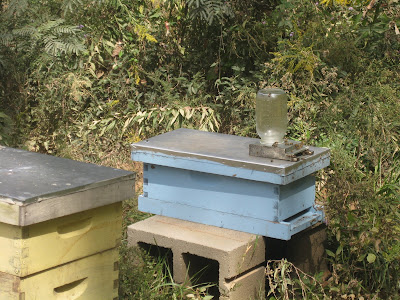 So I moved the nuc and set it on top of the yellow hive. At least the frames in it are habitable. I set the Boardman up at the entry to the hive as one would normally place a Boardman.

If any of you are wondering why there is a frame stuck in the side of this hive, there is a reasonable explanation. The yellow hive is an 8 frame hive. Its bottom board, slatted rack, inner cover and top cover were washed down the creek in the flood. I had an 8 frame top cover at home, but not another 8 frame bottom board or slatted rack.

I brought from home a 10 frame bottom board and we set the hive on that. This leaves that front corner unsupported. To keep the hive level we had to slide something into the space and in the middle of the Blue Heron field, all we had was an extra frame - so I poked it in the space to level the hive. 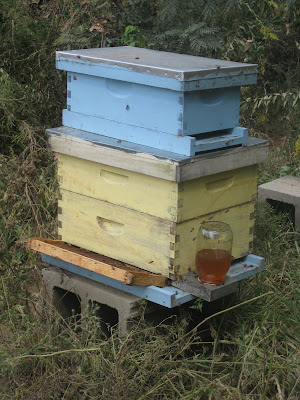 Julia and I decided to determine if the bees were considering occupying this hive (they are flying in and out of it). We didn't know for sure so I resolved to return to the Blue Heron at dusk to see what the situation was. I returned at dusk to find a confusing picture. Bees were flying frantically all around the hive, as it looks like when a hive is being robbed.

The only way to see if bees are staying in the hive at night would be to go look after dark. I couldn't go back there after dark - it's just not safe - to go alone to the back of this field where a flood has just happened. I didn't particularly want to meet either a snake or a wandering human back there in the dark, so I didn't go. 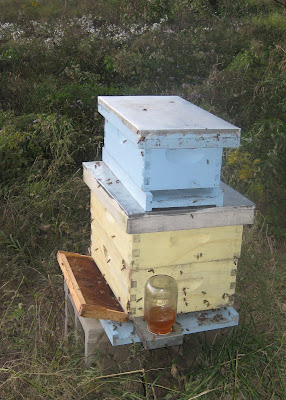 If the bees are occupying the hive, we have two options:
I asked Cindy Bee about doing that and she said that it probably wouldn't work because Blue Heron is only 2.4 miles, driving from my house and as the crow (bee) flies, it is only 2 miles from my house. She said the bees would return to Blue Heron and not stay with the hive combination.

So I think I may have only prolonged their lives a short bit by this effort.