Sugar Syrup from Bag to Baggie

What a terrible year this has been for the bees in Georgia! We had hard rains throughout the honey flow and they put away very little in the way of stores. People tell me that there was little sourwood honey in the N Georgia mountains this year either. Whatever stores my bees put away they are consuming now as if it were already winter. My hives are very low on stores.

According to Keith Delaplane in First Lessons in Beekeeping, a hive should weigh 100 pounds (including the hive, the bees and the stored honey) going into winter. So my hives are all light because they have gone through their stores. I have been feeding them for the last several weeks and will continue into October. 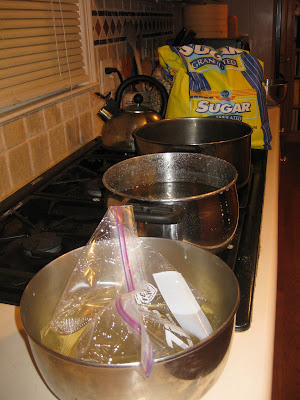 To make 2:1 sugar syrup, you have to bring the mix to a boil or that amount of sugar won't dissolve in the water. Occasionally I leave the kitchen with the pot on the stove, as I did this morning, and forget to go back until the pot has boiled for too long. Usually that means 10 minutes instead of the usual 1 minute boiling.

The other day I left the kitchen, I think, for longer than 10 minutes. When that sugar syrup cooled, it hardened into a block and I threw it away. There went 8 cups of sugar (4 pounds) and several dollars into the trash.

Today I ate breakfast while the sugar syrup was heating up, but left it while I went to check my email. When I (finally) returned to the kitchen, the syrup had boiled down 1/2" lower in the pan. This was bound to become another hard block. I just was not going to throw that batch away.

I decided to try something different.

So I boiled water for tea. When the water was boiling, I added it to the pan with the hot syrup in it and whisked it around. I think this will liquify what would have become a solid block and repair the damage so that I can use this sugar syrup. Here it is in its baggie, ready for delivery to the hives. 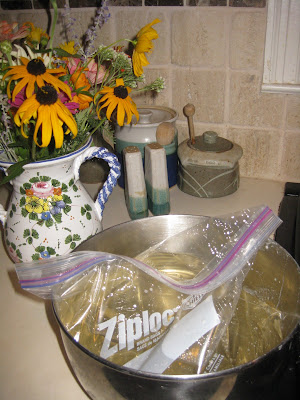 PS. As an illustration of how hungry the hives are, Bermuda consumed a whole gallon baggie of syrup between Saturday afternoon and Monday morning!

Email ThisBlogThis!Share to TwitterShare to FacebookShare to Pinterest
at 9:26 AM
Labels: baggie feeding, sugar syrup