Death threat and the bee hives

Finally the temperature has risen to 52; I am actually at home being Grandma to my grandson Dylan; and the bees are flying - but only from two hives. Before lunch I noticed that the bees are having a veritable party in front of Mellona (the center hive) and are pretty enthusiastic in front of Aristaeus2.

But Bermuda, my original bee hive which, if it survives this winter, will be entering its fifth year, is painfully quiet. I watch the entrance like a hawk, but no bees appear. An occasional bee hesitates around the entrance the way a hive robber does, but no normal entering and exiting is happening.

I felt deflated at lunch, thinking my bees, my original hive, had now bitten the dust. Recognizing that bees were out and about, before Dylan and I went to lunch I made up three sugar syrup baggies (being optimistic) and left them to cool while we went to Dylan's favorite place: Chik-Fil-A. 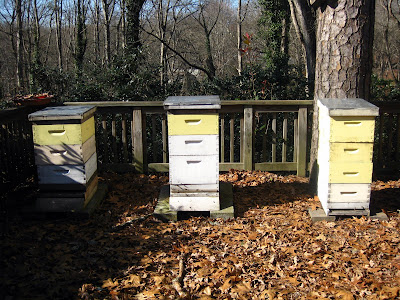 When Dylan went to nap, I opened up the hives. I opened Bermuda first, feeling a sinking in the pit of my stomach.

Joy! Joy! Joy! Under the hive cover in the top box were the bees. They were tightly clustered around two frames in the top box. I think their numbers have diminished considerably, but they were there! And they were alive.

I immediately gave them a bag of 2:1 sugar syrup. It's still too early in Atlanta to feed them 1:1, according to Jennifer Berry's article in Bee Culture this month. 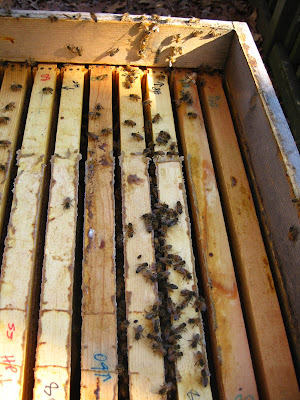 I then opened Mellona and was sad to find dead bees in the sugar syrup which was crystallized. I don't understand this but feel very sad about it. This hive is doing fine, despite the bee kill in the baggie. There are lots of bees somewhere in a lower box on the hive. I didn't explore since it was clear that they are alive and doing fine. I just wanted to put in a baggie and shut the hive back up. 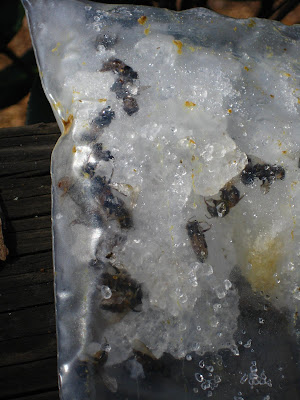 After feeding all three hives, I looked at the leaves in front of Mellona. I pushed the leaves aside and saw the piles of dead bodies. Over the winter many bees die in the hives and the mortician bees can't carry the bodies away from the hive. They appeared to have simply swept these bodies out of the hive. 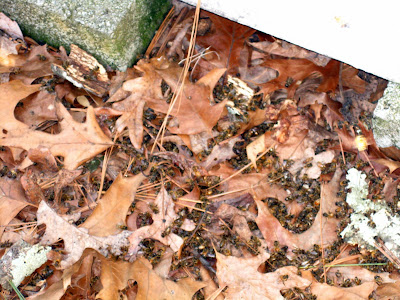 So for the moment the good news is that my bees are all alive - all three hives.

That can turn on a dime, with the exigencies of the weather, and more sudden cold snaps after a few warm days may kill one of my hives yet.