At the Metro Beekeeper Holiday party, I asked my friend and fellow beekeeper, Jason, about making tea lights. Jason makes lots of them and provides them for the Metro Atlanta Beekeepers short course (coming up on January 23). Jason told me that if I tried making tea lights, I would wish for a mold that he has.

I tried with the 100 tea light forms that I had ordered from Brushy Mountain. Like Jason warned me, it was a messy and less than perfect process. I did end up with tea lights to attach to all the Christmas presents I gave this year and to use as stocking stuffers in the stockings I fill for my adult children.

I set all the molds in an aluminum foil lined cookie sheet. Waxed paper would have done as well as a liner. I didn't want to be scraping wax off of the cookie sheet when I wanted to use it later actually to bake cookies!

I set the mold forms up with a wick in the center of each. I melted the wax in the top of a double boiler that I purchased on EBay just for bee product production. Then I poured the melted wax into a plastic measuring cup with a pouring lip and poured wax into each of the molds. You can see on the photo where I over-poured the wax, resulting in wax on the aluminum foil liner as well as creating something that had to be removed from the exterior of the form before giving the present away. What a mess! 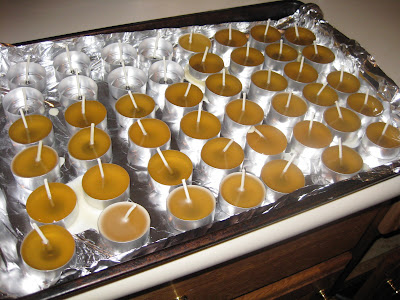 The wicks didn't want to stay in the center or to stand up straight. 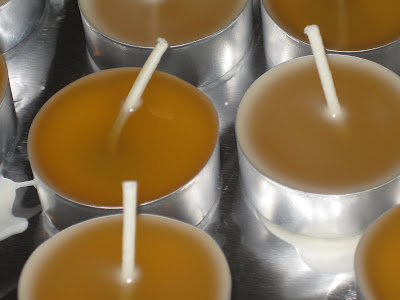 It is a gratifying way to use wax, however. The little lights pour up quickly. The candles actually burn beautifully and well. Beeswax has a longer burning life than other types of wax so for tiny lights, they last for a long time. 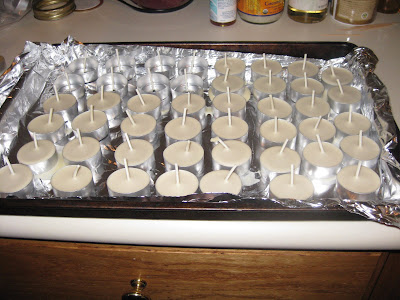 Here they are as they come close to the end of the solidifying stage. 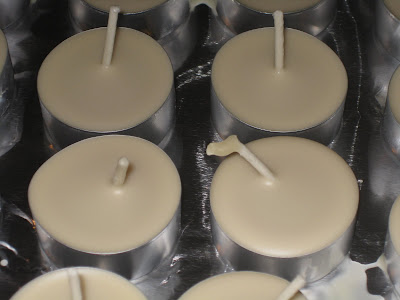 We used a collection of tealights in the center of our Christmas Eve dinner table. Our dinner started at around 8 and didn't end until after 11 and the tealights started going out in the middle of dessert. I was amazed that they lasted that long. 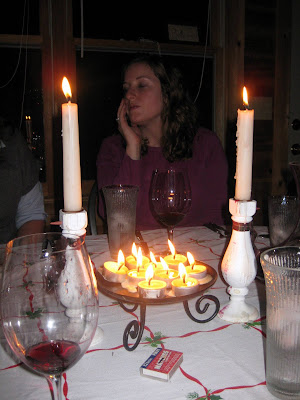 Email ThisBlogThis!Share to TwitterShare to FacebookShare to Pinterest
at 9:01 AM
Labels: candles, melting wax