Cindy Bee Speaks on How to Collect a Swarm 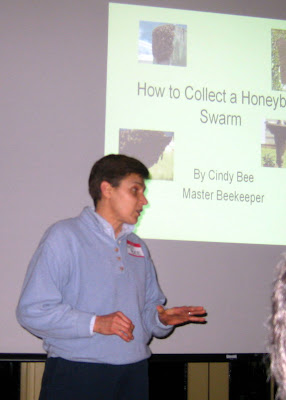 Tonight at the Metro Atlanta Beekeepers' meeting, Cindy Bee, Master Beekeeper who has been working with bees since she was a child, presented a program on how to catch swarms.

First she addressed the reason that bees swarm. She suggested that we think of the hive as an entity and that when a swarm happens, it is the hive reproducing itself. In other words, the swarm is the hive's "baby." Bees swarm in springtime because the arrival of pollen stimulates the queen to lay her eggs. The hive begins to build up the numbers of bees and gets overcrowded.

The workers, not the queen, make the decision to swarm. First they make a replacement queen by choosing several eggs and creating queen cells (feeding the new larvae only royal jelly). Then they make the old queen run round and round the hive to slim her down. Finally they run her out the front door. When she flies away, anywhere from 20 - 80% of the bees in the hive follow her. This event = a swarm.

Meanwhile back at the original hive, the queen cell hatches and the new queen emerges. That queen kills any queens still inside their queen cells and begins the process of getting ready for her mating flight. Swarming delays and impacts honey production because the hive is diminished in numbers and the queen has a while before she is mated and laying so there is a disruption in the hive build-up.

The swarm that left the hive hangs wherever the queen landed while the workers fly out to possible sites for new hives. It is during this hanging time that a beekeeper is likely to get a swarm call. Cindy encouraged us to go ASAP to the site where the swarm has landed because at any point they may make a decision and leave for a chosen home.

Bee veil
Plant clippers
Bee box or some kind of box to put the bees in
Scoops (Cindy suggested using a half gallon plastic milk carton with a handle that has had the top cut off to make a scoop)
A white sheet
Water (for you to drink)
Smoker and something to fuel and use to light it
A piece or two of old, dark comb (smells good to the bee)
Spray bottle with 1:1 sugar water
Duct tape (there are a million uses, aren't there?)
A queen cage
Ratchet strap (Cindy straps the hive box together for transport)
Foam or Screen wire to cover the box entrance
Ladder
Camera
Lemon Scented pledge (or swarm lure)
Flashlight
Bee vac and extension cord (if you own a bee vac)

For the last couple of years about this time in the spring I keep swarm collection stuff in my car. I have a nuc box, a white sheet, a ladder, a bee brush, and most of Cindy's other suggestions.

She suggested that if you are collecting the swarm in a nuc box or a hive box that you should make a hive top out of a wooden frame and screen wire so that you can transport the bees well ventilated. I think I'll make one for my nuc box. I did just order ventilated hive tops for my eight frame equipment but I believe they have an entrance as a feature so wouldn't really work.

Last year and the year before when I went on swarm calls, I didn't take a hive box to collect the bees in, but rather took a cardboard box. She showed a picture of a cardboard box just the right size to hold frames. She had cut a tiny square entrance at the bottom of the box and had glued in a piece of wood to hang the frames from. Boy, that would be an easy way to transport and lighter than the hive box. In other years, I've just dumped the bees into a cardboard box, closed the top and taken them home to dump them in a hive box.

She also encouraged us to ask the caller who is requesting swarm help several questions. Has the swarm landed? How high up are they? How big is the swarm? (I find it helps to ask is it bigger than a basketball? the size of your fist? the size of a watermelon?) How long has it been there? Is it on your property? Has it been sprayed with anything - including just plain water? Also exchange cell phone numbers so if the swarm flies off while you are in transit, the caller can get back in touch with you or so that you can call them if you are having trouble finding their location.

It's about the be swarm season in Atlanta and I really want a swarm for my top bar hive, so I filled out the swarm list form and I hope she calls me at least once this season! 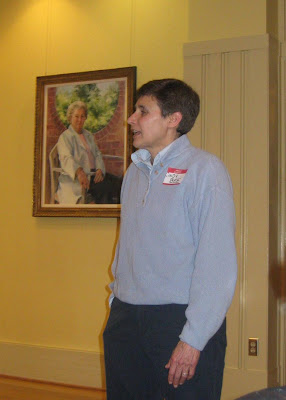