I made 2:1 syrup (actually bee tea - chamomile and thyme added to the 2:1 syrup) early this morning to take to Valerie's house today. I poured it into jars while warm, put it in the car and delivered it to Topsy around noon today. The third jar that I filled is crystallizing tonight. That means that the syrup I put on Topsy will also be crystallizing.....GRRRR. 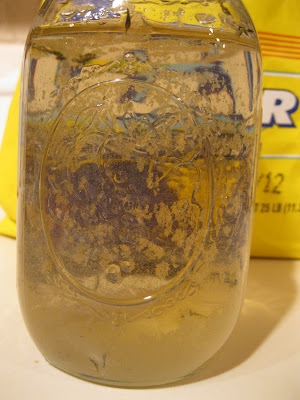 According to this site, saturating the solution with sugar to the point at which the water can take no more is an invitation for crystals to form.  This is why so many commercial beekeepers use high fructose corn syrup.  Fructose does not crystallize.  But sucrose (sugar) does.  You add lemon juice or cream of tartar to candy to keep it from crystallizing.  I will look into whether anyone ever adds lemon juice to 2:1 sugar syrup.

You can see the crystals forming at the bottom of this jar.  Once it gets started the crystals beget more crystals and on and on like Genesis until the entire bottle is solid sugar again. 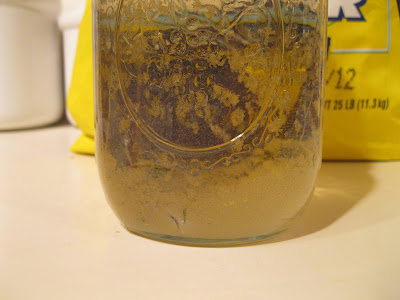 Another view of my frustration. 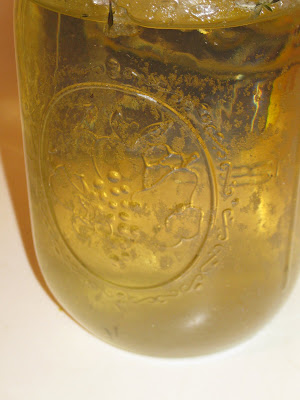 The two bottles of 2:1 that I took off of Topsy also had been busy crystallizing, as you can see in the picture below with crystals forming around the top of the jar (the bottom as it is set into the Boardman inside the top bar hive - I don't feed with Boardman feeders on the outside of any hive).  The bees had pretty much emptied the jars despite the crystals, thank goodness. 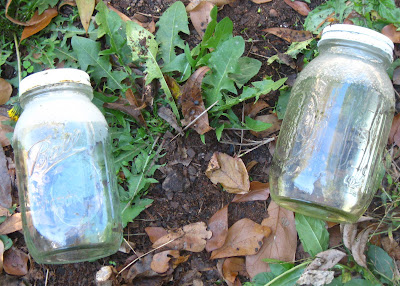 I have all kinds of objections to high fructose corn syrup, but adding a tablespoon is recommended to keep crystal formation from starting.  I think also adding a small bit of lemon juice might accomplish the same thing.  I may try this in my next batch.

After one of the comments below, I looked up Honey B Healthy and it does have lemongrass in the mix - maybe the acid of the lemongrass in it is what keeps the syrup from forming crystals because the sugar in it is sucrose.

Tomorrow when I make more bee tea I'm going to try to add a teaspoon of lemon juice and see what the effect is on the crystal issue.  BTW, I found a post on Beemaster where someone recommends adding a little lemon juice to the mix.